According to an eyewitness who spotted Kylie and Travis in 'high risk halls of labor and delivery,' the makeup mogul is 'pregnant again and 1st trimester sick.'

AceShowbiz - It appears Kylie Jenner is having a bun in the oven. Words on the street are, the Kylie Cosmetics owner is currently expecting her second child after she has been spotted visiting a maternity ward in Los Angeles. It's unclear who the baby daddy of her unborn baby, though the onlooker claimed Travis Scott (II) was with her during the visit.

One social media user, who goes by the name Sophie Ross, posted a screenshot of a chat that she had with the eyewitness. "Right after my c section as I'm being wheeled to recovery we see Kylie Jenner and Travis Scott walk by us," the onlooker noted, before mentioning reports of Kylie's recent hospitalization. "TMZ reported she had been admitted to a local hospital for flu like symptoms but there is no way they would have let them in high risk halls of labor and delivery."

"No visitors and where the operating rooms are," the witness continued. "I think she's pregnant again and 1st trimester sick. This whole breakup story is a decoy to distract. I was like …. is that Kylie? Ha." 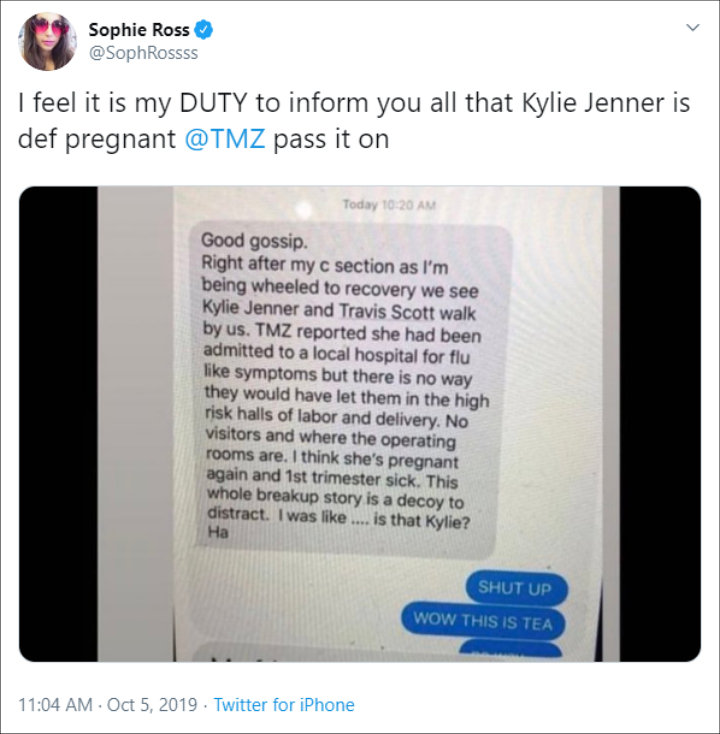 One person claimed to have spotted Kylie Jenner and Travis Scott at a maternity ward.

Reps for Kylie have yet to respond to this report.

In late last month, Kylie was rushed to hospital with severe flu-like symptoms, including nausea and dizziness. In a post addressing her hospitalization, the "Keeping Up with the Kardashians" star noted that it prompted her to miss out the launch of her makeup collaboration with Olivier Rousteing at Paris Fashion Week.

"I'm really sick and unable to travel. I'm heartbroken to be missing this show, but I know that my amazing team, and my friends who are in town for the event, will help me be there in spirit," she said, before sending support to her collaborator and told her followers to "make sure you guys watch the show with me on Friday. It's going to [be] and epic event and I can't wait."