Nicki Minaj Apologizes for Her 'Abrupt and Insensitive' Retirement Announcement

The 'Super Bass' hitmaker, who shocked her fans after declaring that she would withdraw from the entertainment industry to start a family, promises to address it on her 'Queen Radio' show.

AceShowbiz - Nicki Minaj has responded after her retirement announcement sparked a flurry of reactions from her shocked fans. Taking to her Twitter page later on Thursday, September 5, the 36-year-old rapper apologized for her "abrupt & insensitive" tweet that she posted earlier that day.

"@NICKIMINAJ can u please just address this retirement thing. You e never left us so hurt your entire career. We're just hurting Nicki :( it's US it's the barbz plz..," a fan asked the Trinidad and Tobago-born femcee, who then responded, "I'm still right here. Still madly in love with you guys & you know that."

The "Anaconda" hitmaker also promised to address it on her "Queen Radio" show, adding, "In hindsight, this should've been a Queen Radio discussion & it will be. I promise u guys will be happy. No guests, just us talking about everything. The tweet was abrupt & insensitive, I apologize babe." 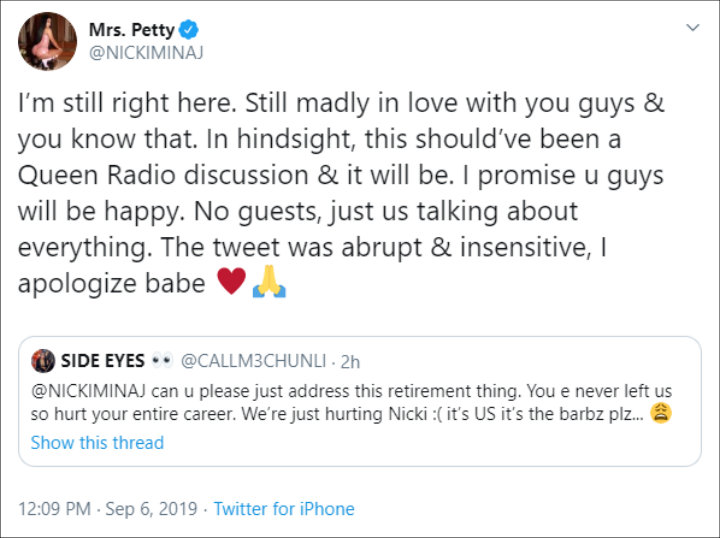 Nicki left her fans stunned earlier on Thursday after announcing on Twitter, "I've decided to retire & have my family. I know you guys are happy now. To my fans, keep reppin me, do it til da death of me, X in the box - cuz ain't nobody checkin me. Love you for LIFE."

The hip-hop star has been engaged to her boyfriend Kenneth Petty and recently obtained a marriage license. She has also referred to Kenneth as her "husband" and changed her name on social media to Mrs. Petty, but it's not clear if the couple is actually married.

The retirement announcement came as a shock to her fans as she had been teasing a new album on her "Queen Radio" show. She also joined Megan Thee Stallion on seasonal smash "Hot Girl Summer".