Things regarding the rapper's baby mamas are getting juicier after previous report suggests that he has 8 baby mamas, whom he initially refused to have a child with due to her racial background.

AceShowbiz - Rapper Future is one of the celebrities who has a lot of baby mamas. However, little did people know that the "Fine China" rapper has 5 "wives."

The revelation comes after a 7th woman came forward with her claims that she was Future's baby mama. The woman, an Instagram model named Eliza Reign, claims that the rapper threatened to harm her when she refused to abort their child.

Instead of directly addressing the allegations, Future took to his Instagram account to give more insights into his life. "I have 5 wives BTW. Love them all to death," he wrote. Upon seeing his recent post, fans were wondering who was his fifth wife. 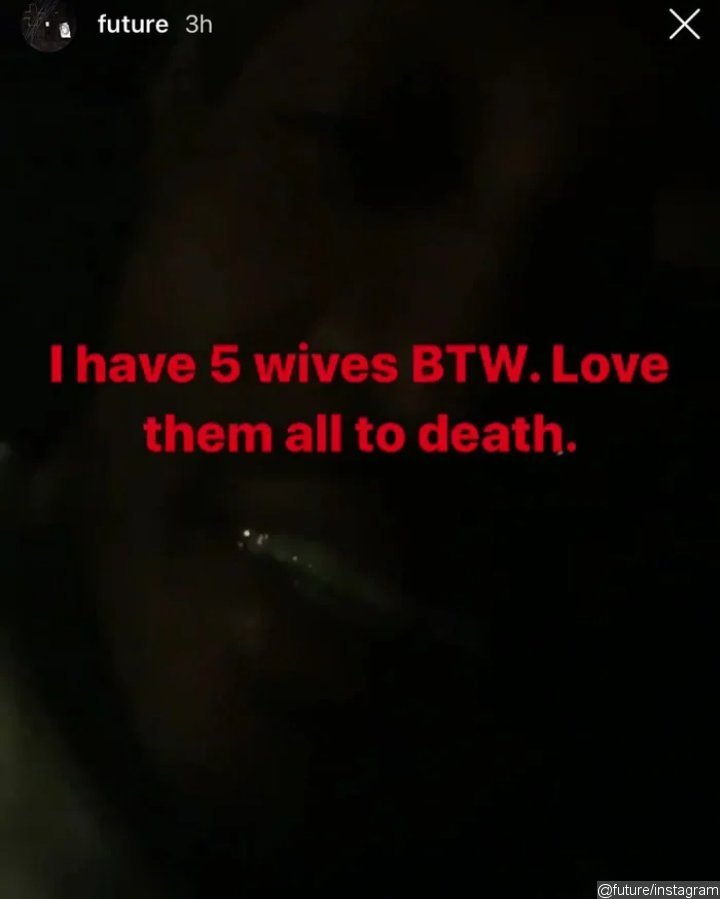 Future shares his oldest child Jakobi, who was born in 2002, with ex Jessica Smith. He then welcomed her second child Londyn, a daughter whom she shares with India J, in 2009. Brittni is his third baby mama as they share a son named Prince, who was born in 2012. Future's another baby mama whom public know was Ciara, who is the mother of their 5-year-old son Future Zahir.

Rumor has it, Future has a child with a woman in Arizona. According to a new report, their child's name is Kash and she was born in either 2014 or early 2015. While the name of the woman is currently unknown, it is said that the child was the reason why Ciara called it quits with the "Pluto" rapper.

Things regarding Future's baby mamas are getting juicier after previous report suggested that he had 8 baby mamas. The woman was said to be Cindy Renae, but the Atlanta rapper initially refused to have a child with Cindy due to her racial background.

Previous report suggested that Future and Cindy had been messing since 2015, with the rapper giving her the OVOFBG ring that he also gave to Drake when they released a mixtape together. However, when it came to having children together, it's said that Future didn't want to have one not because he already has a lot of children, but because he refused to have "a child by a Mexican."

Despite that, they ended up having a child together whom they named Legend Ary Wilburn. As for how the parents came up with that name, The Shade Room obtained several screenshots of them discussing the name of the child, with Future pointing out that his kids "never have regular names." Cindy then suggested that they should name the child Khalik, but Future immediately rejected idea because it sounded "like a terrorist and it's [just] wack."