CNN has reported that a number of state-run news outlets have publicly backed a #SupportMulan campaign with one describing tweets that backed the ban as 'cyber violence.'

AceShowbiz - Chinese state media has been accused of co-opting the boycott of Disney's live-action movie "Mulan (2019)" as a way to discredit the Hong Kong protesters.

The hashtag #BoycottMulan began trending on Twitter after its Chinese star Crystal Liu, also known as Liu Yifei, voiced her support for Hong Kong police amid the city's anti-government protests.

"I support the Hong Kong police. You can all attack me now. What a shame for Hong Kong," the 31-year-old posted on Weibo, China's social media platform.

Soon after people began posting #BoycottMulan on platform Twitter, which is banned in China, with the hashtag trending in Hong Kong and the United States. And Twitter users accused the actress, who is an American citizen, of supporting police brutality.

According to CNN, state-run news outlets have publicly backed a #SupportMulan campaign, putting Disney in the awkward position of having its interests defended by the authoritarian regime.

"Anti-China public opinion wants to boycott #Mulan as if whoever buys the ticket and watches the film is the enemy of democracy and freedom. These people are ideological paranoids," tweeted China's state-run Global Times, adding the hashtags #SupportMulan #LiuYifei. And on Thursday in an editorial in the Global Times newspaper, it accused those who tweeted in support of the boycott of "launching cyber violence against people who supports (sic) China," reported CNN. 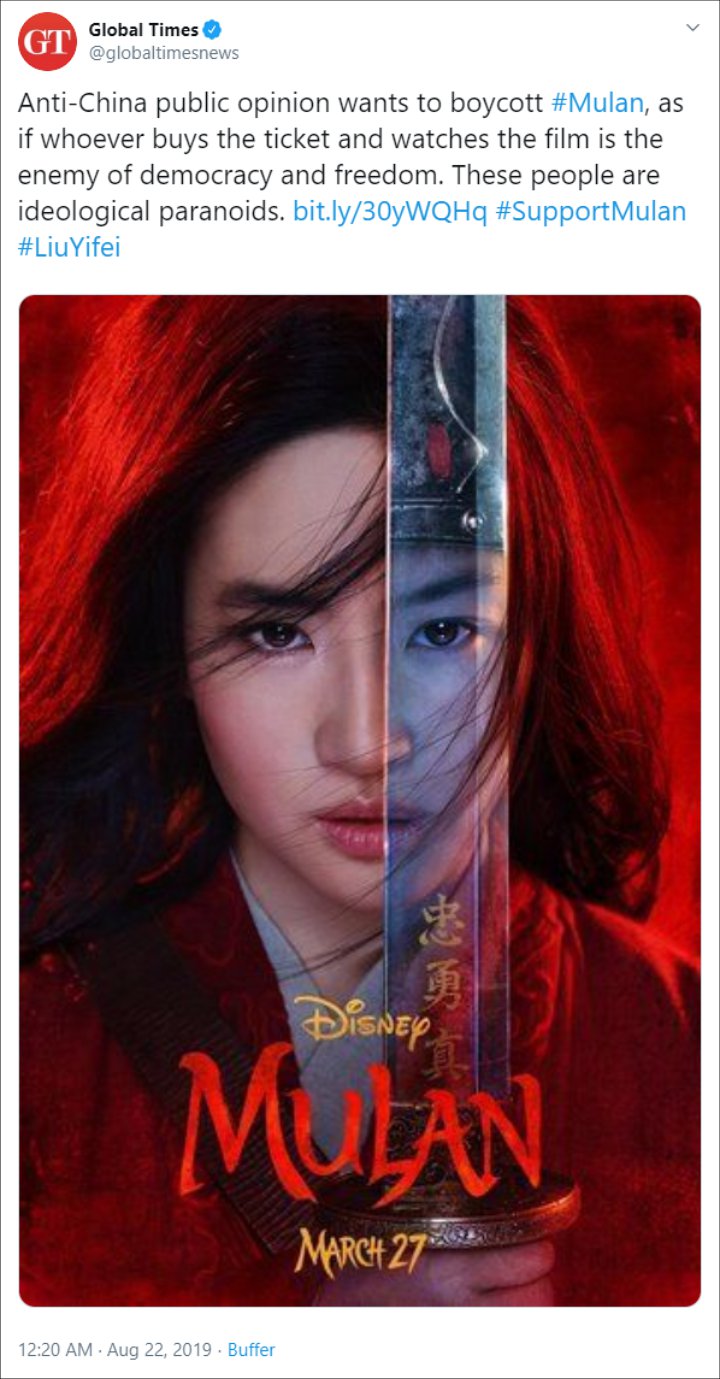 "As the hashtag #Mulan was once topped (sic) Twitter's worldwide trend, these naysayers only want to use the popularity of the film to smear the Hong Kong police," reporter Li Qingqing wrote in the newspaper.

On Monday Twitter suspended more than 200,000 accounts from China that were "deliberately and specifically attempting to sow political discord in Hong Kong, including undermining the legitimacy and political positions of the protest movement", reported Variety.

Li also called for accounts tweeting in favour of the boycott to be suspended.