The daughter of Michael Jackson and her musician boyfriend may have secretly tied the knot after they're spotted wearing matching gold rings at 'The Peanut Butter Falcon' premiere.

AceShowbiz - Paris Jackson and Gabriel Glenn may have taken their relationship to the next level after dating for more than a year. The 21-year-old aspiring actress/model and her boyfriend sparked rumor that they might have been secretly married.

It all started after the pair attended the Los Angeles premiere of "The Peanut Butter Falcon" at Arclight Cinemas in Hollywood on Thursday, August 1. Posing together on the red carpet, the duo showed off their matching gold bands which they wore on their ring fingers. 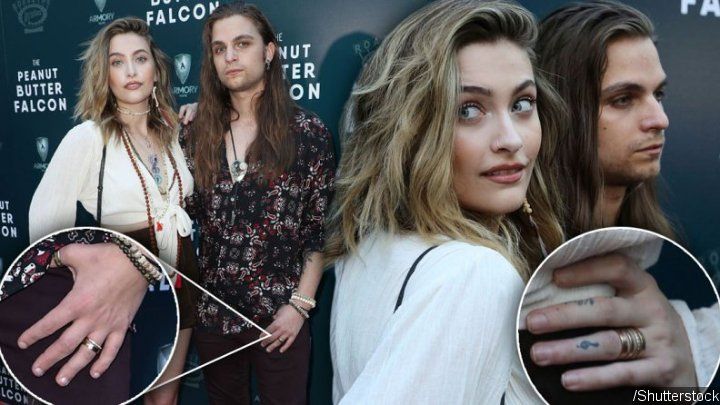 The couple held hands as they struck poses for the camera. Paris flashed a smile, while Gabriel kept a straight face. The pair dressed in matching boho styles. The daughter of Michael Jackson looked chic in a white long-sleeve top with a deep neckline, paired with a mini brown skirt. She wore some beaded necklaces and brown suede boots. As for her boyfriend, he opted for a black printed shirt and dark pants, while accessorizing with some beaded bracelets.

Paris took to her Instagram page to share their pictures at the premiere. She contributed to a song for the film and wrote on her post, "so grateful for you @butchwalker i love you so much. this film took me through all the highs and lows of every emotion the heart is capable of, as well as the music. i hope you guys feel the same when you watch it. absolutely remarkable."

While it's not clear what their matching rings signify, Paris' family is reportedly freaking out upon learning of their gold bands. "The family is freaking out," an alleged insider tells Radar Online. "She is not answering any of them. No one knows what to think; Paris is a loose cannon." The source adds that "there would be a lot of people disappointed in her" if she did secretly marry Gabriel.

The source says that Paris' family is worried hard-partying Glenn is a bad influence on the "Scream" star.

Paris has not addressed the secret marriage rumor, but a source tells ET Online that they are not engaged or married. "They are very serious but they're young and just enjoying each other’s time as girlfriend and boyfriend right now," the source says.

Paris Jackson Sympathizes With Reporters Despite intrusion Into Her Privacy