'Oh no girl. They're not humble nor kind,' a fan says of the 'Don't Be Tardy...' star's kids who allegedly caused a scene at the airport which resulted the star and her family being kicked off of a plane.

AceShowbiz - Kim Zolciak is standing for her kids. The former "The Real Housewives of Atlanta" star and her family were reportedly kicked off a Delta flight to Atlanta over the weekend because her kids were "misbehaving."

Kim's daughter Brielle Biermann shared the upsetting experience in a now-deleted tweet. "Tommy at gate 27 delta LAX just kicked my WHOLE FAMILY OFF the flight to ATL bc we were waiting on my dad with our service dog to finish going thru security & kJ & kash started crying bc they thought we left him and Kaia was literally SHITTING AND HE KICKED US OFF!!!! WTF," she wrote on the blue bird app. 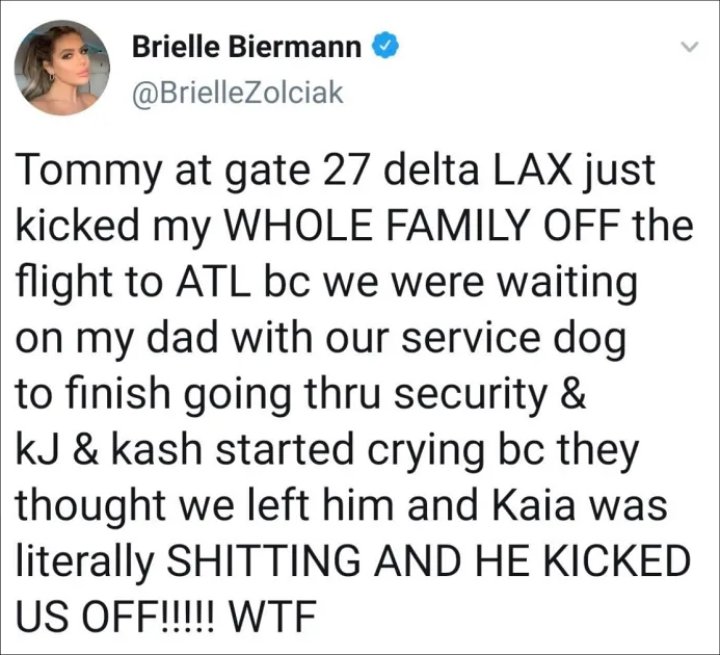 Brielle Biermann shared that her family was kicked out off a plane after her siblings were misbehaving.

The 22-year-old went on explaining, "He was grabbing my siblings and escorting them off HIMSELF while my moms in the bathroom with Kaia!!!!!! I have never dealt with anything like this in my life."

In response to her tweet, Kim quote-retweeted it and said, "Unacceptable @Delta but police are now involved."

Kim Zolciak suggested that she took it to legal matter.

Being kicked off a plane was surely not a pleasant thing to experience but people weren't symphatetic to the TV stars. Replying to Kim's tweet that read, "My kids are humble and kind [heart emoji] I feel extremely blessed," a fan wrote back, "Oh no girl. They're not humble nor kind. One just needs to follow them on social media to know how shallow they are."

Another fan agreed with the tweet, and added, "they are self centered, obnoxious and not that smart. Let's hope the boys take after their dad in the smarts."

Kim, obviously, did let anyone slammed her kids. Hitting back at the haters, the "Don't Be Tardy..." star said, "Excuse me?!! Have you met my children?! I didn’t think so! My kids would give you the shirt off their backs! Go take your miserable self and find Jesus sweetie."

Report: Princess Beatrice and Beau Edoardo Mapelli Mozzi to Get Engaged This Year