Donning a tight black dress with a cleavage-baring corset top and long tuxedo-style jacket, Nicki gave everyone a peek at her nipple as the cup on her corset top fell down.

Nicki opted for a classy look as she donned a tight black dress with a cleavage-baring corset top, which she paired with a matching long tuxedo-style jacket. She completed the look with a pair of diamond-encrusted heels. The Trinidadian-born musician looked stunning and all while posing elegantly before the camera, until the cup on her corset top fell to low and gave everyone a peek at her nipple. 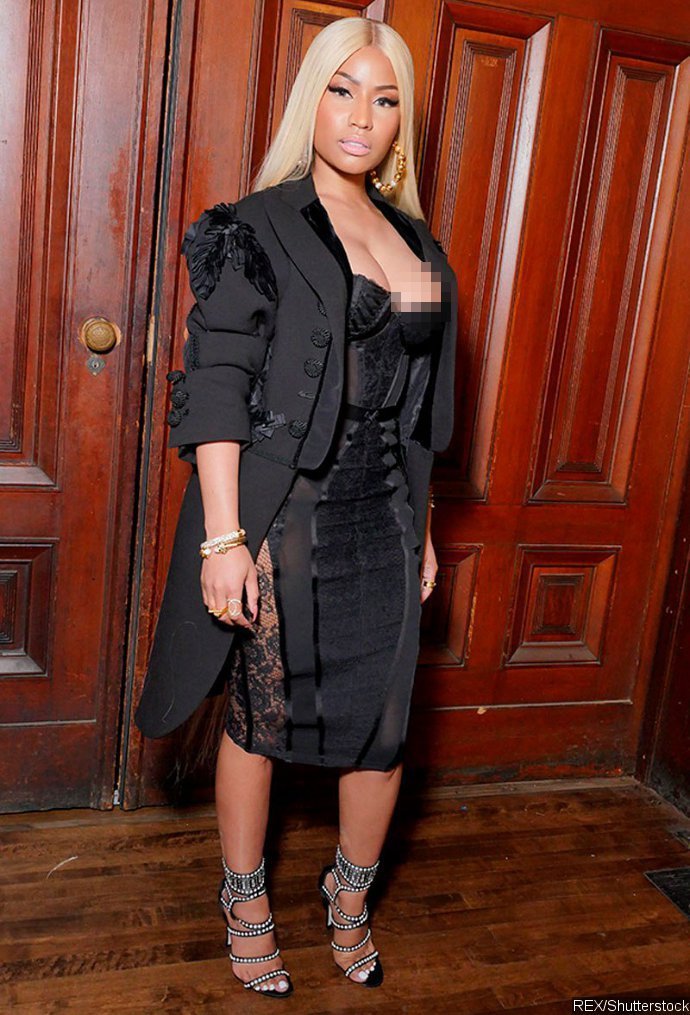 The rapper, however, didn't seem to notice the wardrobe malfunction as she kept posing in front of cameras as if nothing happened. The "No Frauds" rapper also took to her Instagram account to share her look at the event. "Nothing wrong with getting a little wet #MarcJacobs #NYFW," she captioned a photo of her walking down stairs.

Nicki later flaunted her hourglass figure in another photo. "The #MarcJacobs show was [heart emojis]. Coat/Earrings by #MarcJacobs Dress by #agentprovocateur Hair by @tokyostylez Makeup by @officialsheiks Stlyed by @maher_1 Photo by @grizzleemusic Dream Team Vibes. They know the difference #NYFW," she captioned it.

The #MarcJacobs show was 👍🏽👍🏽👍🏽♥️♥️♥️🖤🖤🖤✊🏽✊🏽✊🏽🔥🔥🔥🔥Coat/Earrings by #MarcJacobs Dress by #agentprovocateur Hair by @tokyostylez Makeup by @officialsheiks Stlyed by @maher_1 Photo by @grizzleemusic Dream Team Vibes. They know the difference 💕😍💕😍 #NYFW

It was hardly the first time for the "Bang Bang" raptress to suffer a wardrobe malfunction. When gracing the red carpet of the 2017 MTV VMAs, Nicki was clad in a garish pink latex ensemble and paired it with killer high heels. The Young Money femcee, however, exposed more than she intended to as she had a dire camel toe situation.

A source claimed that Nicki felt embarrassed by it. "She had no idea it would be that obvious until she was under the lights and camera and by that time it was too late. Her phone was blowing up all night afterward with friends teasing her. After the embarrassment quickly wore off, she had a good laugh about the pink outfit which she vowed to never wear again," said the source.

Report: Chris Pratt and Anna Faris Calling Off Divorce to Save Money

Get New Look at Vision With This 'Avengers: Infinity War' BTS Photo