Paula is brought onstage for The Clairvoyants and Jon Dorenbos' tricks as the ten finalists perform before the audience in the live results show.

AceShowbiz - "America's Got Talent" has crowned the winner of its season 11. Ten acts, %cSal Valentinetti%, %cSofie Dossi%, %cLinkin' Bridge%, %cLaura Bretan%, %cThe Clairvoyants%, %cBrian Justin Crum%, %cTape Face%, %cViktor Kee%, %cJon Dorenbos% and %cGrace VanderWaal%, were all vying for the prize, but only one walked home as a champion after the Wednesday night, September 14 finale.

In the first part of the result announcement, we learned that Tape Face, Linkin' Bridge, Sofie Dossie, Laura Bretan and Viktor Kee were not in the Top 5. Next, it was revealed that Sal Valentinetti finished in the fifth place, and Brian Justin Crum came in the fourth place.

Host %cNick Cannon% announced that it was the closest the vote has ever been for the Top 3, with less than 1 percent of the vote separating all of them. Grace VanderWaal was eventually declared the winner, while The Clairvoyants was the runner-up and Jon Dorenbos nabbed the third place.

The 12-year-old singer/songwriter burst into tears. "How does it feel? These are tears of joy, right?" Nick asked her. She answered between sobs, "Yes, of course." She was congratulated by judge %cHowie Mandel% who picked her as his Golden Buzzer in the auditions.

Earlier that night, the ten finalists performed to entertain the crowd. Sal Valentinetti performed with the cast of "Jersey Boys". Tape Face pulled a stunt with the help of Jon Dorenbos, Brian Justin Crum, Viktor Kee and one member of Linkin' Bridge. Brian Justin Crum later returned to the stage to sing %cRadiohead%'s "Creep".

Laura Bretan joined Italian pop trio %cIl Volo% for an amazing performance, while Sofie Dossi swung from a hoop in the sky and Viktor Kee juggled at the same time. Grace VanderWaal sang her original song "I Don't Know My Name" which she performed during her first audition. Linkin' Bridge sang "7 Years" as season 6 contestant The Silhouettes danced in the background.

%cPaula Abdul% made a surprise appearance, joining The Clairvoyants for their act. She also helped Jon Dorenbos pull his card trick. 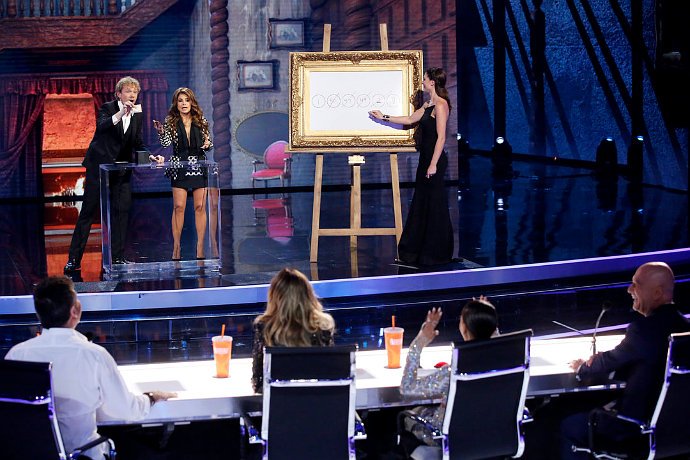