The 'Cool for the Summer' hitmaker opens up about facing criticism surrounding her sexier look.

AceShowbiz - Demi Lovato graces the cover of Allure's February issue. In an interview with the magazine, the "Confident" hitmaker opens up about facing criticism surrounding her sexier look. "I'll have people who are like 'Stop talking about it,' but this summer I started wearing sexier stuff, and I got some hate for that, like, 'You've changed," she shares. " like, What's wrong with being confident enough to wear this?"

She continues, "I've never felt as confident in my skin as I do today. A year ago, on tour, almost every inch of my body was covered by clothing, and it was because I was hiding behind so many layers. Once I started feeling better about myself, I felt better about showing more skin. I have insecurities about my arms, so to wear a tank top on stage is extremely liberating for me, and uncomfortable sometimes."

"It's also a statement, like, 'Hey, watch out. You're no longer getting the insecure Demi that you've been getting for the past couple of years. I mean business now,' " she adds. 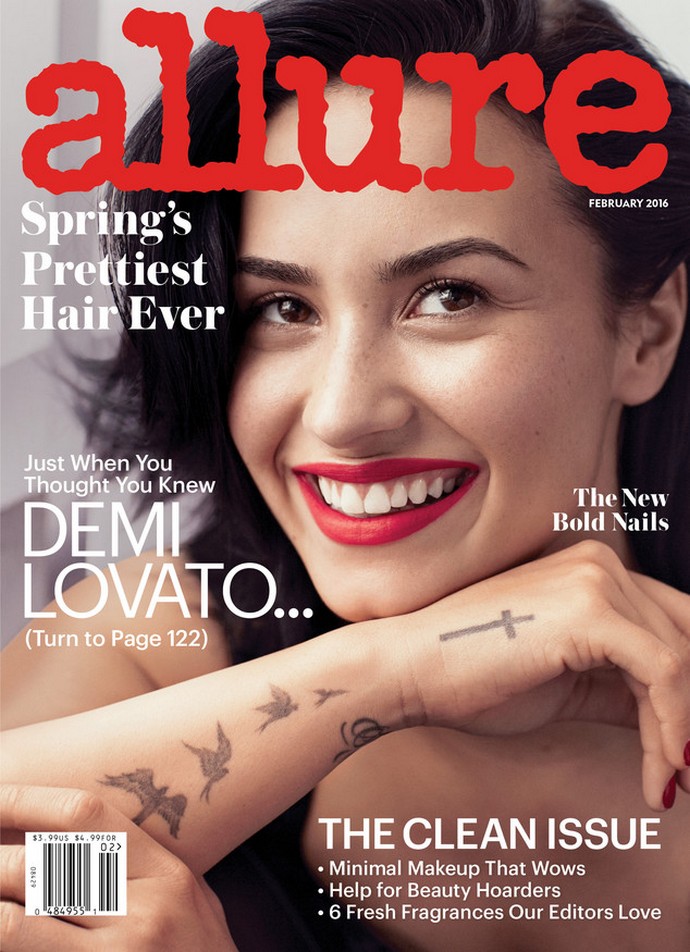 In the interview, Demi also reveals the worst beauty advice she's ever gotten. "I signed with Disney Channel when I got 'Camp Rock', and I had a gap between my two front teeth. They were like, 'Would you be willing to fix it?' I wish today that I hadn't, because my gap was really cute," she says.

The "Let It Go" singer then shares her most awkward spa experience, "It's not spa, but I was getting laser hair removal...down south...and the lady started talking about how her kid was a huge fan. Boundaries."

Demi shares on Instagram a #nophotoshop selfie from her Allure photo shoot. In the photo, she poses in front of a bathroom mirror wearing a pair of black lingerie. "Behind the scenes (and bathroom door) of my Allure cover shoot.. Posting a #nophotoshop pic because I'm proud to show my body the way it naturally is.. (And there was great lighting...) #Allure #CONFIDENT," she captions it.

Behind the scenes (and bathroom door) of my Allure cover shoot.. Posting a #nophotoshop pic because I'm proud to show my body the way it naturally is.. (And there was great lighting...) 😂❤️ #Allure #CONFIDENT 💋💋💋