The 'Harry Potter' star, donning a complete suit to portray a young lawyer in the upcoming thriller, is captured from short and wide ranges in the images.

AceShowbiz - Back in September, Daniel Radcliffe was spotted filming "The Woman in Black". Now, two official pictures from the movie have been released by Hammer Film, giving other but similar looks at the young actor in a vintage outfit.

The movie is still in production in England. Radcliffe is portraying a young lawyer named Arthur Kipps, who is ordered to travel to a remote village and sort out a recently deceased client's papers. As he works alone in the client's isolated house, Kipps begins to uncover tragic secrets. And his unease grows when he glimpses a mysterious woman dressed only in black while local villagers are unwilling to explain the significance of her appearance.

Ciaran Hinds, Liz White, Janet McTeer and Alisa Khazanova join Radcliffe on the cast ensemble while James Watkins is working behind the lens. Jane Goldman writes the screenplay for the horror thriller based on Susan Hill novel of the same name. No release date is set for "The Woman in Black". 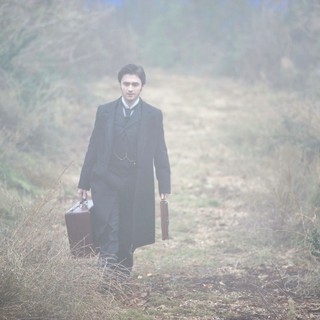