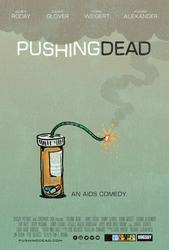 In the dark ensemble comedy "Pushing Dead," HIV-positive writer and bouncer Dan Schauble (James Roday) struggles to refill his drug prescriptions after a bureaucratic snafu drops him from his health plan. Schauble quietly panics that any disruption to his pharmaceutical regimen can have disastrous consequences for his health, but while he navigates the labyrinthine world of modern healthcare, the other people in his life suffer from their own personal trials and tribulations. His roommate Paula (Robin Weigert) is lonely and "afraid of everything" while his boss Bob (Danny Glover) has recently separated from his wife Dot (Khandi Alexander).