A modern and murderous fable of success, love and the single woman, Miss Nobody is a darkly comic movie about Sarah Jane McKinney's (Leslie Bibb) rise up the corporate ladder and the delightful but complicated romance that ensues.

Unlucky in love, living at home with her eccentric mom (Kathy Baker), and stuck in a dead end secretarial job at Judge Pharmaceuticals, Sarah Jane longs for more out of life. Her surprise promotion to junior executive appears to be just the ticket. But with promotion comes a new world of wily and complicated executives, most notably a dashing newcomer, Milo Beeber (Brandon Routh).

Soon Sarah Jane must balance her dreams of success and true love with other diversions...namely Beeber's resume as a potential mate, a miracle cure for Alzheimer's and corporate intrigue at Judge.

Sarah Jane finds the executive suites of Judge Pharmaceuticals are not only filled with quirky and scheming co-workers but also with opportunities for a girl with a killer instinct. And as Sarah Jane literally eliminates the competition, she unexpectedly falls for the man of her dreams, Detective Bill Malloy (Adam Goldberg) - unfortunately the cop intent on cracking the case of the mysterious deaths at Judge Pharmaceuticals. 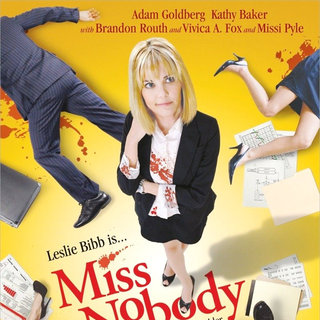 Poster of Moving Pictures' Miss Nobody (2010)

Tyler Perry Fires Back at Spike Lee, Insists 'Madea' Character Is to Honor His Mom and Aunt