A man named Dr. Light and the android that he built to be his lab assistant, Rock, were betrayed by the evil Dr. Wily, who stole Dr. Light's work and made evil robot with special weapons to take over the world.

Dr. Light reconfigured his lab assistant into a battle droid with armor and a cannon, which he then called Mega Man. Once victorious over the evil robots, Mega Man can mimic their weapons, which are useful in the games as certain enemies are vulnerable to other enemies weapons. 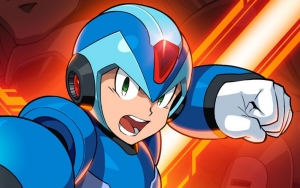