The NCIS team investigates the murder of Petty Officer Colin Boxer as he was shot and killed while driving a Ferrari. McGee learns that the Ferrari is registered to the VCX FileShare corporation and was used by the CEO, Vijay Chaya. Abby uses the serial number on the gun found at the crime scene to track it to a Maryland pawn shop, where the clerk traces the purchase to a woman named Kim Taylor. They bring Kim in for questioning to learn that she gave the gun to her brother Kris. Ziva and McGee attempt to hunt Kris down at his college dorm room and only find his roommate there, but a second visit yields an explanation from Kris that the gun had been stolen from his car. Tony and Ziva head to a hotel Colin was working at as a part time valet and speak to his coworker, who informs them Colin had taken Vijay's Ferrari for a joyride and also mentions a bookie had threatened to kill him. Ziva interrogates the bookie, but his alibi checks out. McGee reviews footage from Homeland Security cameras from the night of the crime to see a motorcyclist following the Ferrari. After being confronted with a frame-capture from the footage, Kris identifies his roommate, Alec Dell, as the motorcyclist. A background check uncovers that Dell had interned at VCX FileShare previously and pitched an idea that had been shot down at the time but was later patented by Vijay. They determine that Dell was bent on revenge against Chaya and mistakenly killed Colin that night, believing he was Chaya. They convince Chaya to lure Logan by sending him an email informing him that he would be depositing a million dollars in his bank account as partial payment for his idea. They trace Dell's bank activity to the Appalachians and arrest him at his hideout. Gibbs reconnects with Leroy Jethro Moore, his father's best friend and the man he was named after, and convinces his father to let go of his grudge against Moore for indirectly contributing to his wife's death. He reunites the two of them, enabling them to settle their differences. 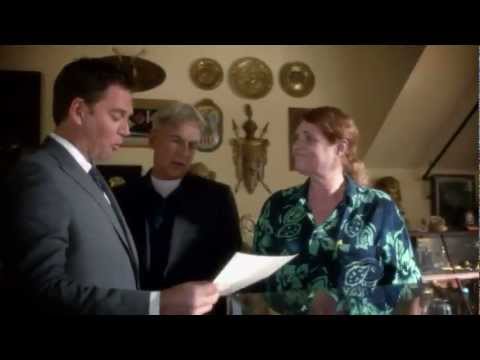