The Australian actor reveals he has a close encounter with a venomous snake at night and shares a picture of the black-and-white creature on his driveway.

AceShowbiz - Russell Crowe was almost bitten by a venomous snake over the weekend, December 4. Admitting he'd broken one of his own rules by leaving the house without any shoes on, the 58-year-old "Gladiator" star stumbled across the creature while walking barefoot outside his home in Australia.

"On the driveway. Me and my buddy Bandy Bandy. Thankfully, his markings broadcast his presence. Broke one of my own rules, walking outside, at night, without shoes. A little reminder of the folly of that choice," Crowe wrote as he took a picture of the venomous black and white striped Bandy-bandy snake and posted it on Twitter. 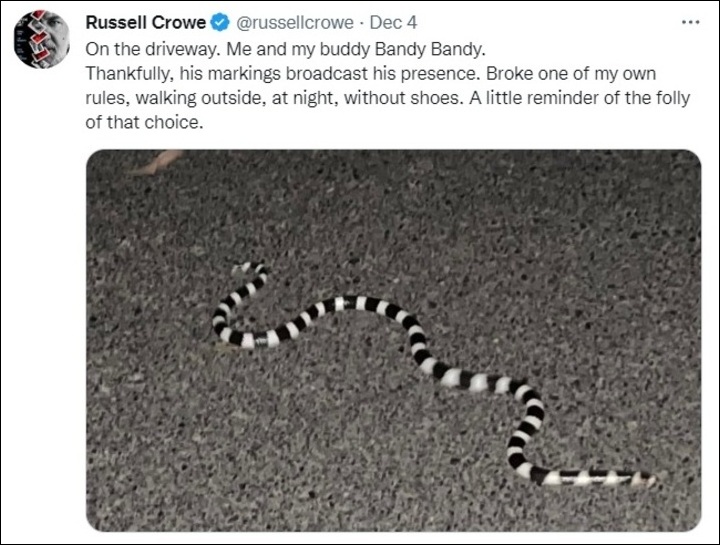 Russell Crowe has a close encounter with a snake

He also took a video of the creature slithering across the tarmac outside his home in Nana Glen, New South Wales and added, "Who's my buddy now?"

The snakes are endemic to Australia and there are five known species of Bandy-bandy. The snake encounter comes shortly after Crowe opened up about his personal life and dismissed rumours he'd wed his girlfriend Britney Theriot.

The actor - who was married to actress Danielle Spencer, 57, from 2003 until 2018 and has sons Charles, 18, and Tennyson, 16, with her - has been dating Britney, 39, since 2020 and they were recently hit with rumours they'd made their relationship official.

However, the actor is said to have dismissed the gossip in a text message to radio host Erin Molan. Speaking on the 2Day FM breakfast show "Hughesy, Ed Erin" last month, Erin said, "[He texted me] Yeah, good guess. We are not married.' Yeah, they are not married ... "

The rumours spread back in October, when "Broken City" actress Britney was said to have been spotted leaving a hotel in Italy wearing a ring on her wedding finger.