The media personality takes to Twitter to put the 45-year-old 'Gold Digger' rapper on blast for including a montage of her criticizing him in one of the videos.

AceShowbiz - Vivica A. Fox has responded to Kanye West's campaign ads as he formally announced his 2024 presidential bid. The actress took to Twitter to put the rapper on blast for including a montage of her criticizing him in one of the videos.

"Now dawling if you gonna use a clip featuring me it should be accurate!" the "Independence Day" actress tweeted on Friday, November 25. She continued writing, "I was not happy with you 5 saying George Floyd wasn't murdered, but THANKS 4 watching my @foxsoultv show #CocktailsWithQueens & know 2 Can Play that game." 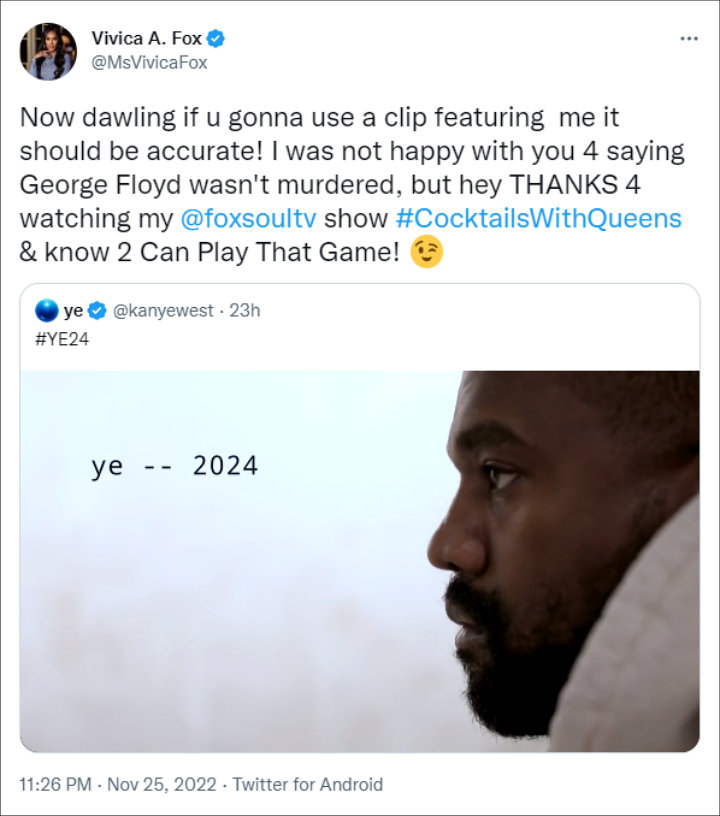 Vivica A. Fox responded to Kanye West using her for campaign video.

Co-host Claudia Jordan showed support to Vivica by quote-retweeting the post and wrote, "!!!!!" The official Twitter account of Fox Soul TV also chimed in, saying, "Original video here!!" alongside a link to a YouTube video from the episode.

In the said campaign video, Ye used a clip from "Cocktails With Queens" in which Vivica encouraged others to boycott him over his false remarks about George Floyd's death on "Drink Champs". "Yo, Kanye. Eff you. And I mean that with everything inside of me," she said at the time. "You got to cancel him. And I know we not trying to be in a cancel culture but we got to hit him in his pockets now. Because he, obviously, doesn't care about the African-American culture."

Ye, however, didn't provide context behind Vivica's comments on the campaign video, which also highlighted his legal feud with Adidas.

That wasn't the only campaign video that Ye shared on Twitter on Thursday. In another post, Ye shared a video in which he dissed Donald Trump following his visit to Mar-a-Lago. "The thing that Trump was most perturbed about [is] me asking him to be my vice president," "The New Workout Plan" spitter said. "I think that was, like, lower on the list of things that caught him off guard. It was the fact that I walked in with intelligence."

Elsewhere in the video, he claimed that Trump insulted his ex-wife Kim Kardashian. "I was thinking, like, that's the mother of my children," he said. Toward the end of the clip, Ye also shared that the former president "was screaming at the table" and told him that he would lose. "Has that ever worked for anyone in history? Telling me that I'm going to lose?" Ye said. "I'm like, 'Hold on, hold on. You're talking to Ye.' "

Vivica A. Fox Tells Kanye West Not to Be 'Afraid' to Seek Help

Vivica A. Fox Breaks Into Tears While Saying She Hasn't Met Her Godson in 2 Years