The Tesla boss celebrates NASA's successful DART mission by posting on Twitter a picture of the 'King Richard' actor landing an open-handed blow to Chris Rock at the Academy Awards.

AceShowbiz - While Will Smith has reportedly moved on from the Oscars slap drama, Elon Musk still can't. The business magnate has borrowed a meme from the actor's slap on Chris Rock when he weighed in on NASA's mission to alter the trajectory of an asteroid by smashing a spacecraft into it.

On Monday, September 26, NASA's DART successfully changed the direction of the asteroid by traveling at an estimated 14,000 mph before it collided with the asteroid some 7 million miles away from Earth. Elon was apparently celebrating it as he compared the collision to Will's slap on Chris.

The SpaceX CEO posted on Twitter a meme superimposing NASA's logo on Will's head as the actor delivered an open-handed blow to Chris' face while at the 2022 Academy Awards back in March. Meanwhile, Chris' face is plastered with an image which is meant to depict the space rock known as Dimorphos. He left the photo captionless. 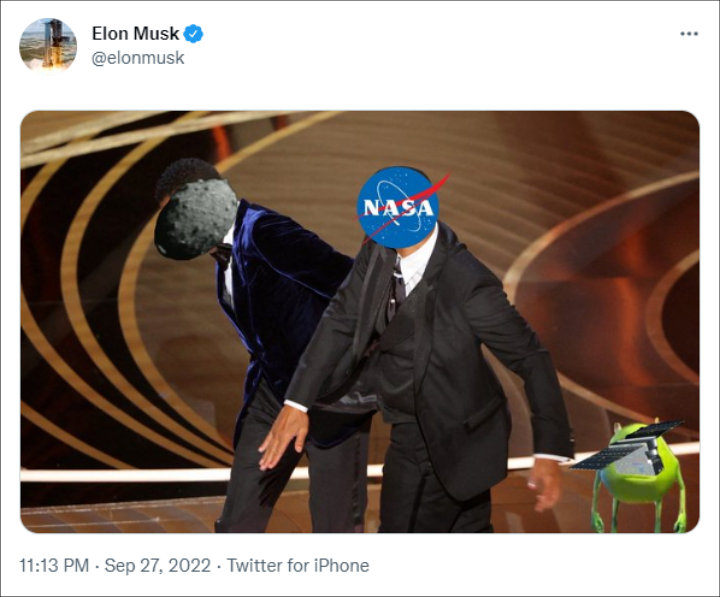 The DART mission was meant as an unprecedented dress rehearsal for the day a killer rock menaces Earth. Scientists expected the impact to carve out a crater, hurl streams of rocks and dirt into space and, most importantly, alter the asteroid's orbit.

"We have impact!" Mission Control's Elena Adams announced as the spacecraft smashed into the asteroid. It, however, will take as long as a couple of months to determine how much the asteroid's path was changed.

The $325 million project is the first time ever that humans are attempting to shift the path of a natural celestial object in space. "As far as we can tell, our first planetary defense test was a success," Elena later said in a press conference as the room was filled with applause. "I think Earthlings should sleep better. Definitely, I will."

Meanwhile, Will has been laying low since he caused a stir with his behavior at the Oscars ceremony. He has apologized multiple times, saying in late July that he was "deeply remorseful." He claimed in a video, "I've reached out to Chris and the message that came back is that he's not ready to talk and when he is, he will reach out. So I will say to you, Chris, 'I apologize to you.' My behavior was unacceptable and I'm here whenever you are ready to talk."

A$AP Rocky Reacts to His Viral Mosh Pit Video After Tyler, the Creator Trolls Him