The longtime sports writer comes out as transgender ahead of receiving the Naismith Hall of Fame's Gowdy Award next month because he wants 'to do that as authentic self.'

AceShowbiz - ESPN reporter M.A. Voepel has come out as transgender. The sports journalist announced through Twitter on Tuesday, August 9 that he's transitioning to male and will now go by he/him pronouns.

Voepel, who formerly went by Mechelle Voepel, opened up about his story in a series of tweets. "In sports media, we're lucky to tell stories of others' journeys. We have our own, too," he began. "Part of mine is being transgender, and I'm transitioning to male. Byline now M.A. Voepel, pronouns he/him. Please feel free to call me Voepel, MV, Michael, Mike; I'm good with them all."

Voepel said he decided to come clean about his transition ahead of receiving the Naismith Hall of Fame's Gowdy Award next month because he wants "to do that as authentic self." He shared, "I have the great honor of receiving Gowdy Award next month from Naismith Hall of Fame, and wanted to do that as authentic self, hence this announcement now. Fear can keep us paralyzed for decades, especially when we think we will lose all that is dear to us, including career …"

Throughout his journey, ESPN remains supportive of his decision. "At some point, you realize you need to have faith that your happiness/well-being is worth pursuing, and also have faith in other people's kindness and grace," he added. "Grateful for a company that supports all of its employees, for terrific family and friends, and for societal progress ..."

He went on concluding, "I may look and sound a little different. Glad to be who I've always been inside. Dedication to covering women's sports, a lifelong joy as well as job, and admiration for all involved - players, coaches, execs, fans, referees, colleagues - that stays exactly the same. Thanks!" 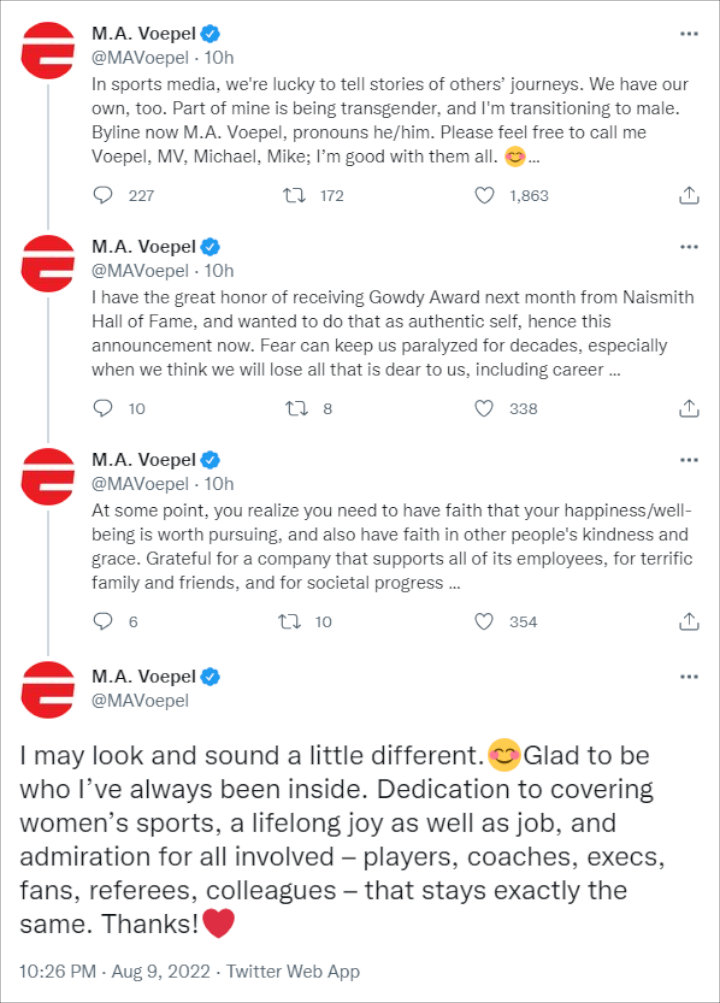 Voepel has since received supportive messages from several ESPN personalities, including T.J. Quinn who wrote, "Proud to have you as a colleague." The WNBA added in a tweet, "Congrats MV sending all of our best."

Meanwhile, ESPN immediately changed the pronouns to he/him in Voepel's bio on its Press Room website. According to the company, he joined ESPN.com in 1996 as a women's college and pro basketball writer, and since has also covered additional college sports.