The 76-year-old actress takes to Twitter to slam the justices who ruled on Friday, June 24 to allow individual U.S. states to decide whether to make abortion illegal.

AceShowbiz - Bette Midler wants Viagra banned. In the wake of the Roe v Wade overturning, the "Hocus Pocus" actress reasoned the tablets should be barred since was "God's will" for men to have a "limp d**k."

"Time to ban Viagra," the 76-year-old actress said on Twitter while hitting out at the justices who ruled on Friday, June 24 to allow individual U.S. states to decide whether to make abortion illegal. "Because if pregnancy is 'God's will,' then so is your limp d**k.' " 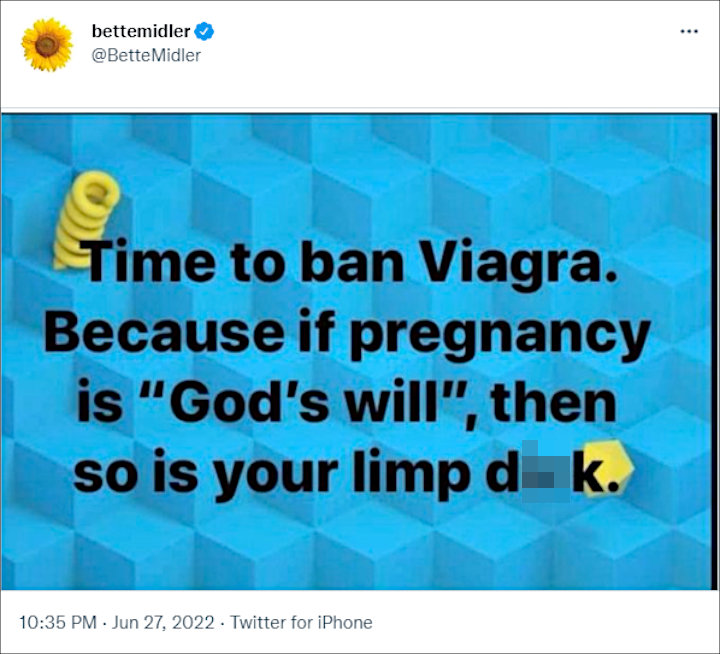 Midler's remark quickly attracted almost 250,000 likes amid the huge wave of rage at the Supreme Court decision. The mother of one's Twitter feed was also filled with more criticism of the move, which will effectively outlaw terminations for millions of women in America.

The actress, who will soon be seen in "Hocus Pocus" sequel, also branded Justice Clarence Thomas an "a*****" and Justice Samuel Alito a "villain." Her first public reaction to the news was the remark online, "They did it. THEY DID IT TO US!"

"#SCOTUS has overturned #RoevWade, enshrined in the Constitution as settled law for over 50 years," she raged on "How dare they? This #SCOTUS is absolutely tone-deaf to the will and even the actual needs of the American people. #WakeUpAmerica." 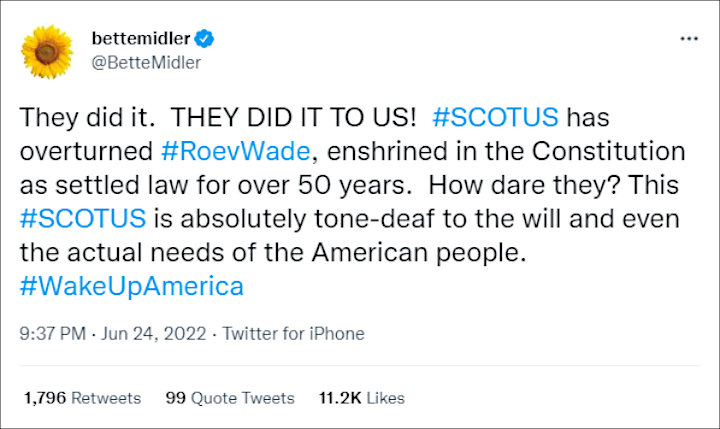 Actress and comedian Wanda Sykes was among other outspoken celebrities who have warned the U.S. is "no longer a democracy" in the wake of the move. She accused the conservative judges of "lying" under oath when they each suggested during their confirmation hearings Roe v Wade was a settled precedent, and attacked Americans living in "middle states" for apparently telling others how to act as she believes the majority of the U.S. population live in New York and California.

Celebrities have also been sharing their stories of abortion after the Supreme Court ruling, including "Dancing with the Stars" pro Cheryl Burke and the late Paul Walker's 23-year-old model daughter Meadow Walker.