AceShowbiz - Drake is seemingly unbothered by criticism surrounding his new album, "Honestly, Nevermind". Instead of getting butthurt after some people called his new project "sucks," the Canadian hip-hop star offered a classy response.

"It's all good if you don't get it yet. That's what we do. We wait for you to catch up," the 35-year-old emcee, born Aubrey Drake Graham, said in an audio clip. "We're already here though, we caught up already. On to the next."

Drake dropped his new surprise album, "Honestly, Nevermind" on Friday, June 17. The project, which follows his September 2021 album "Certified Lover Boy" and is dedicated to the late fashion designer Virgil Abloh, only has one feature from 21 Savage.

Following the album's release, many social media users offered their two cents. "I thought Drake was finna rap his a** off. He gave us Forever 21, Hot Topic, H&M a** music," one person argued on Twitter, while another quipped, "Drake got my hips swaying like a bad b***h." A third opined, "I can see why this album is named honestly, nevermind, that's exactly what he said when it was done."

Giving more insight into the new studio record, Drake penned on his Apple Music profile, "I let my humbleness turn to numbness at times letting time go by knowing I got the endurance to catch it another time." He added, "I work with every breath in my body cause it's the work not air that makes me feel alive."

"That's some real detrimental s**t but that's that s**t my perfectionist mind doesn't really mind because no one knows whats on my mind when I go to sleep at 9 & wake up at 5-unless I say it in rhyme," he further wrote in the lengthy poetic note. "I know if it was a dark night where all the odds were against my side & my skill went to whoever took my life they'd done me off with a big smile & maybe evn post it for some likes."

Drake Laughs Off Criticism of His Lyrics 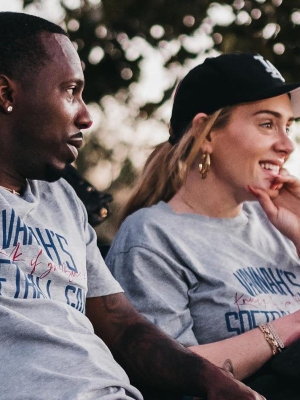