The 54-year-old filmmaker, who helmed the 2016 DC Extended Universe (DCEU) film, responds to a fan on Twitter who asks him about the upcoming final cut of the movie.

AceShowbiz - David Ayer says his upcoming "Suicide Squad" cut will be "shockingly different" to the original movie. The filmmaker, who helmed the 2016 DC Extended Universe (DCEU) film, claimed the final cut was "not my movie." And now, he has now told how his upcoming version is like "apples and oranges" when comparing the two.

When asked by a fan on Twitter how different his film is to the theatrical cut "considering scenes, tone, score, acting, characters screen time", Ayer replied, "Shockingly different. Apples and oranges." 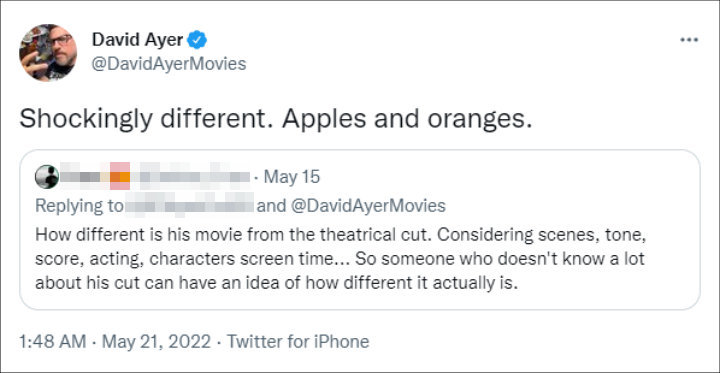 The 54-year-old director additionally admitted he has had a discussion with "Justice League" director Zack Snyder about how to make his director's cut line up with the rest of the DCEU. Asked iif he spoke to Snyder, Ayer shared, "Yes."

The new report arrived after Ayer blasted the studio cut of "Suicide Squad" back in July. He said, "I put my life into 'Suicide Squad'. I made something amazing - My cut is an intricate and emotional journey with some 'bad people' who are s*** on and discarded (a theme that resonates in my soul)."

"The studio cut is not my movie. Read that again. And my cut is not the 10 week director's cut - It's a fully mature edit by Lee Smith standing on the incredible work by John Gilroy. It's all Steven Price's brilliant score, with not a single radio song in the whole thing," he continued.

He added, "It has traditional character arcs, amazing performances, a solid 3rd Act resolution. A handful of people have seen it. If someone says they have seen it, they haven't."

Following his comments, fans begged Warner Bros. to release an 'Ayer Cut' of the movie, as they did with "Zack Snyder's Justice League", but the director refused to add to the speculation at the time. "I will no longer speak publicly on this matter, the filmmaker said.