Phoebe Bridgers Unveils She Had an Abortion While on She's on Tour After Roe v. Wade Draft Leak

In a candid social media post, the 'Motion Sickness' singer says that she 'went to Planned Parenthood' to get the abortion pill, noting that 'it was easy,' and hopes that 'everyone deserves that kind of access.'

AceShowbiz - Phoebe Bridgers has unveiled that she once had an abortion. Making use of her social media platform, the "Motion Sickness" songstress candidly shared that she did it when she was on tour.

On Tuesday, May 3, the 27-year-old musician wrote in an Instagram Story, "I had an abortion in October of last year while I was on tour." She further recalled, "I went to planned parenthood where they gave me the abortion pill. It was easy."

Phoebe later said that she hoped everyone could get access easily too. "Everyone deserves that kind of access," she added, before concluding her message as saying, "Here's a big list of places you can donate to right now." 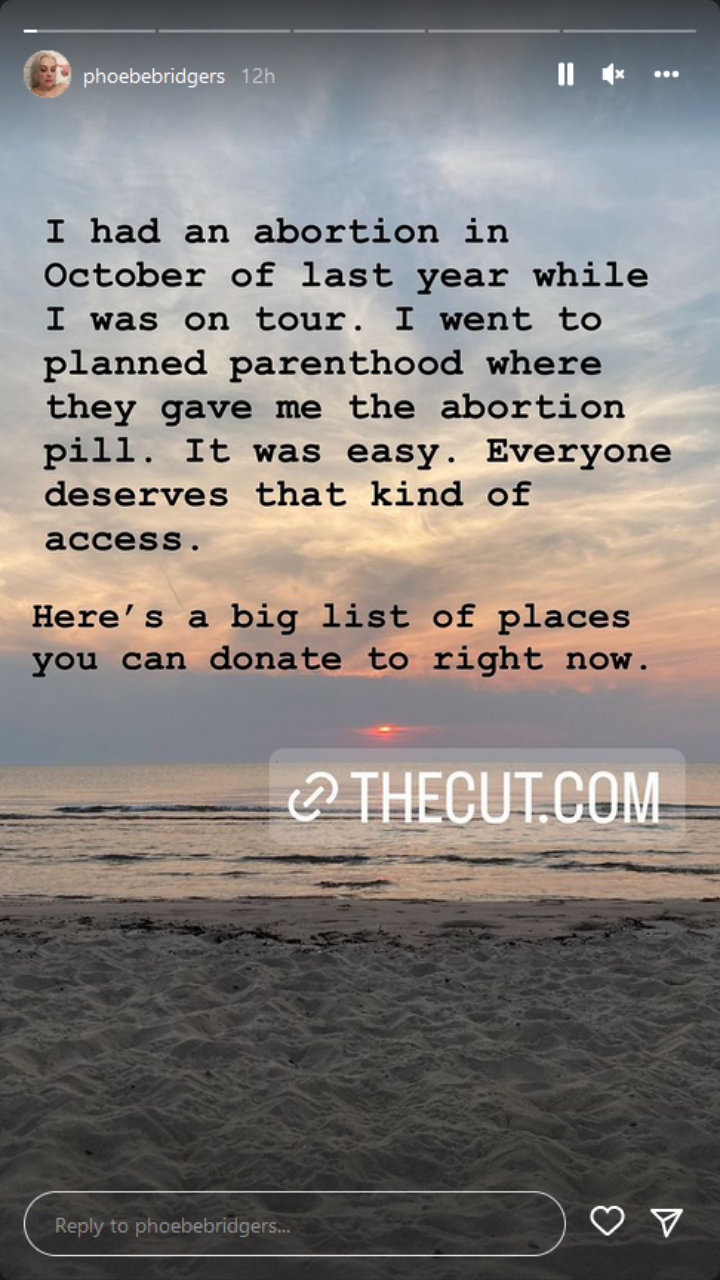 Phoebe Bridgers revealed she had an abortion when she was on tour last year.

Phoebe shared her experience hours following a bombshell report that the U.S. Supreme Court is set to overturn Roe v. Wade next month. If the ruling is overturned, at least 23 states would likely outlaw or heavily restrict the procedure.

Abortion rights have been under threat in recent months as Republican-led states move to tighten rules, with some seeking to ban all abortions after six weeks, before many women even know they are pregnant. In March, Arizona Governor Doug Ducey signed a bill banning abortions after 15 weeks of pregnancy. Meanwhile, Idaho Governor Brad Little signed a six-week abortion ban that allows family members of the fetus to sue providers who perform abortions past that point, similar to a Texas law enacted last year.

Phoebe has long spoken out about abortion rights. Last October, after Texas Governor Greg Abbott signed a bill banning abortions after six weeks of pregnancy, she released a cover of Bo Burnham's "That Funny Feeling". She sold it on Bandcamp with all proceeds going to Texas Abortion Funds, a donate site that splits the money between 10 different groups that help people in the state obtain abortions. "This one's for Greg Abbott," she wrote on Instagram for the song's release.