After being slammed by the 'Old Town Road' hitmaker's father, Robert Stafford, the 'Wipe Me Down' rapper sarcastically tells him not to 'get mad' at him for telling his son to 'commit suicide.'

AceShowbiz - Boosie Badazz (Lil Boosie) has further expressed his hatred towards Lil Nas X. The "Wipe Me Down" rapper sarcastically told the "MONTERO (Call Me by Your Name)" hitmaker's father, Robert Stafford, not to "get mad" at him after his homophobic and vile rant.

On Tuesday, October 26, the "Bad Azz" artist tweeted, "DONT GET MAD AT ME CAUSE YOUR SON CAME OUT LIKE THAT LOL [shrugging emoji] I KNOW IT HURTS." In a following Twitter post, the 38-year-old rapper wrote, "LETS GO BRAVES!!" 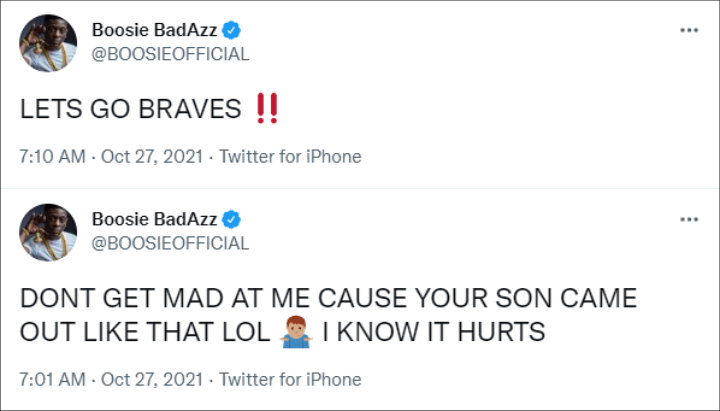 Boosie's tweets came after Lil Nas X's father, Robert, called him out. "How the hell you're a gangsta rapper promoting drugs, gun violence, degrading women and getting high every video talking about you're for the kids man sit your old man looking a** down," Robert defended his son in an Instagram Story. "The game has past you. We real Bankhead over here. Not like the guy who claims it."

Instead of taking it as a joke, Boosie attacked Lil Nas X with homophobic rant using slurs and suggesting him to take his own life. "Stop trolling me f****t Lol. U a whole b***h playing with a gangsta SMH U can keep sucking d**k n getting f**ked n your a** n peace," he tweeted.

"N #uhateyourself I would too if I was you LOL," Boosie added. The "Youngest of da Camp" artist ended his tweet as saying, "NasX if you #commitsuicide you would do this world a huge favor Nobody wants U here."

Responding to Boosie's harsh social media post, Lil Nas X wrote, "I am truly saddened. i have never been so mortified in my life." He added, "I can't believe disney channel has yet to play halloween town this entire October."

In response, Boosie insisted that he has "international love." He penned, "If yall think the whole world hate me 'yall trippin'. I have international love n respect for how I am n what I stand for n never forget there's a ghetto in every city, state, country etc. who rock with Boosie frfr #therealest."