The former Ring of Honor wrestler, who underwent left arm amputation surgery nearly one year ago, shares that the doctors were forced to amputate his legs immediately after he had trouble walking.

AceShowbiz - Jimmy Rave has had his legs amputated. The former wrestling star said doctors were forced to amputate both of his legs after he suffered MRSA infection. He underwent the procedure nearly a year following his left arm amputation surgery.

On Sunday, October 24, the 38-year-old retired wrestler opened up about the procedure, which happened in June, via Twitter. Alongside a black-and-white photo of himself from his hospital bed, the former Ring of Honor wrestler wrote, "Apparently it's time for me to come clean. This past June I began having trouble walking & went to my surgeon. He determined I had MRSA in both legs & they needed to be amputated immediately."

Jimmy continued, "Promoters can tell you along with my peers, I've had a history w/this and would cancel Shows often due to this condition." He added that he didn't know "where rumors started" that he was dealing with "something else" and insisted that he has "ALWAYS been honest with my past."

"Pro Wrestling is all I ever loved. It sucks to think that the tribe I would have died for, would say untrue things about me. I've gone this whole time not disclosing my legs because of this embarrassment," Jimmy admitted. He concluded his post, "Sorry I fell short of your expectations. I tried ... I really did." 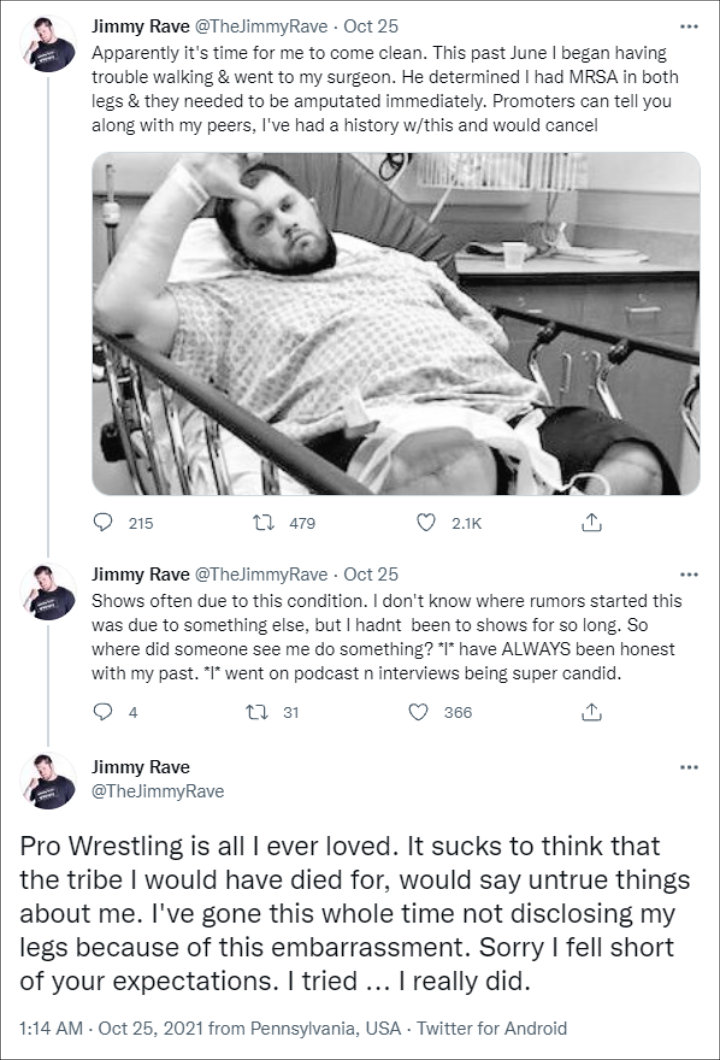 Jimmy Rave shared that he had his both legs amputated via Twitter.

That same day, Jimmy posted a photo of what appeared to be his hospital bill on his Instagram page. In it, it could be seen that the bill had amounts totaling $103,314.77. "Thank you to all those who have been supportive of this journey thus far," he wrote alongside the snap. "Your contributions have helped in my daily living and getting life back in order. I just recently got this bill in the mail ...WOW!"

His fans and friends went on to show their support online. Former competitor Romain Vezirian wrote, "I hate that this happened to you. Going from being a huge fan of yours to sharing the ring with you remains the highlight of my career. We're all rooting for you."

In the meantime, a fan penned, "Man this takes courage however you don't owe anyone any explanation. Keep pressing forward and don't let the haters get to you." Another commented, "I remember first seeing you having great matches in CZW during the 'Best of the Best' tournament in 2003, been a fan of you ever since. You have a positive legacy in wrestling no matter what anyone says."

Back in November 2020, Jimmy revealed that after 21 years, he decided to retire from the pro wrestling world. At that time, he unveiled that he was infected with MRSA which prompted doctors to amputate his left arm. He tweeted, "My world came crashing down when Doctors found an infection in my left arm."

"I tried toughing it out but by the time I saw a doctor it was too late and they had to amputate my left arm above the elbow. Thus effectively ending my in ring career," Jimmy added. "This was the hardest thing I've ever had to type. Please take your health much more seriously than I did."

MRSA, also known as Methicillin-resistant Staphylococcus aureus, is a staph infection caused by bacteria that doesn't respond well to antibiotics, according to the Centers for Disease Control and Prevention. It's typically spread in healthcare facilities but can also be transferred through skin-to-skin contact and is common among the high school wrestling community.