In a sweet clip shared on the 'One Tree Hill' actor's social media page, it could be seen the first-time father smiling at the camera while resting the newborn babies against his chest.

AceShowbiz - Jamie Chung and Bryan Greenberg officially become first-time parents. "The Hangover Part II" actress and her husband broke the news by sharing a sweet video of their newborn twins after secretly welcoming them.

The actors, who never made an announcement that they're expecting, made public their new roles as parents on Sunday, October 24 on their Instagram accounts. The first-time father was the first to announce the exciting news with a video of himself resting the two newborn babies against his chest.

"We got double the trouble now @jamiejchung," the "One Tree Hill" alum captioned the heartwarming clip. In the comment section, his wife, Jamie, responded with two red heart emojis.

Jamie then reshared Bryan's post on her Instagram Story. In a following Story, "Lovecraft Country" star also reposted her pal Erin Cunningham's post. Erin, who congratulated the actress for her new motherhood journey, wrote, "So happy for my lovely friends [love emojis]. Y'all are gonna be the best parents." 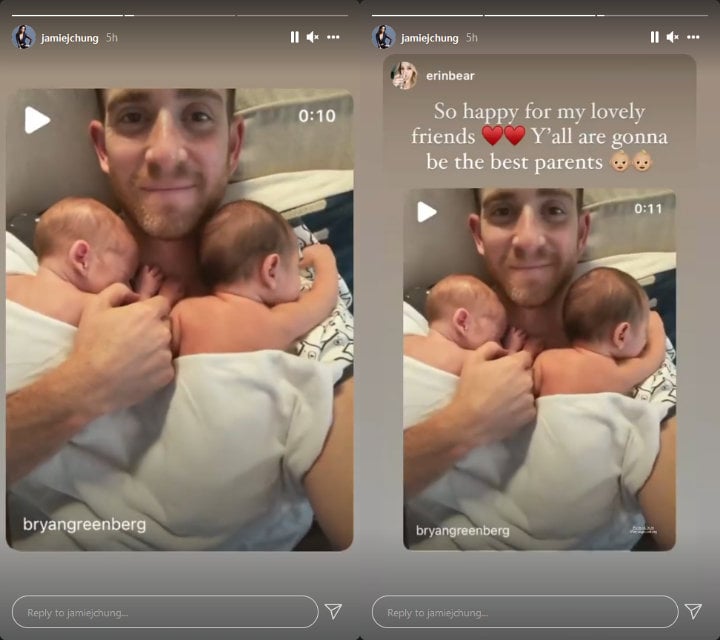 Jamie Chung shared video of her newborn twins on her Instagram Story.

Both Jamie and Bryan, who tied the knot in 2015 after three years of dating, didn't give further details about the newborn twins' gender, date of birth or names. Jamie herself didn't seem to drop any hints about her pregnancy at recent events.

Jamie's last public appearance was at the Women's Image Awards on October 14 in Los Angeles where she looked chic in a red suit. On October 2, "The Gifted" alum showed off her toned abs in a crop top and skirt at Veuve Clicquot Polo Classic in Los Angeles when she and Bryan walked the red carpet together.

The babies' arrival came two years after Jamie opened up about her fertility journey. At the time, the "Big Hero 6" star first unveiled her decision to freeze her eggs. "I've been stewing over the idea of freezing my eggs for a couple of years now, and decided to move forward with the process only just recently," she wrote in an Instagram post.

"I'm buying time. I'm unsure and scared and hopeful," Jamie added. "I have the best life partner a person can ask for and I know I want to one day raise a child with Bryan. I'm just unsure when that will happen."

Jamie Chung Thanks Her Fertility Doctors After Welcoming Twin Babies