The Blink-182 bassist is giving fans an update on his health on his social media platform two weeks after revealing that his stage 4 diffuse large B-cell lymphoma cancer is in remission.

AceShowbiz - Mark Hoppus is offering his fans and followers an update on his health condition. The Blink-182 bassist revealed that he has undergone surgery to remove his chemo port two weeks after announcing that he is cancer-free.

On Thursday, October 14, the 49-year-old rocker shared a photo on his Instagram Story that saw him wearing a face mask while waiting for the surgery. "Surgery to remove my chemo port," he wrote over the snap.

In the following Stories, Mark shared pictures from the procedures. The frontman of the rock band included an image of his arm before going under the knife, a snap of a small device attached to his vein that helps deliver drugs used in chemotherapy and a snap of his arm post-surgery. 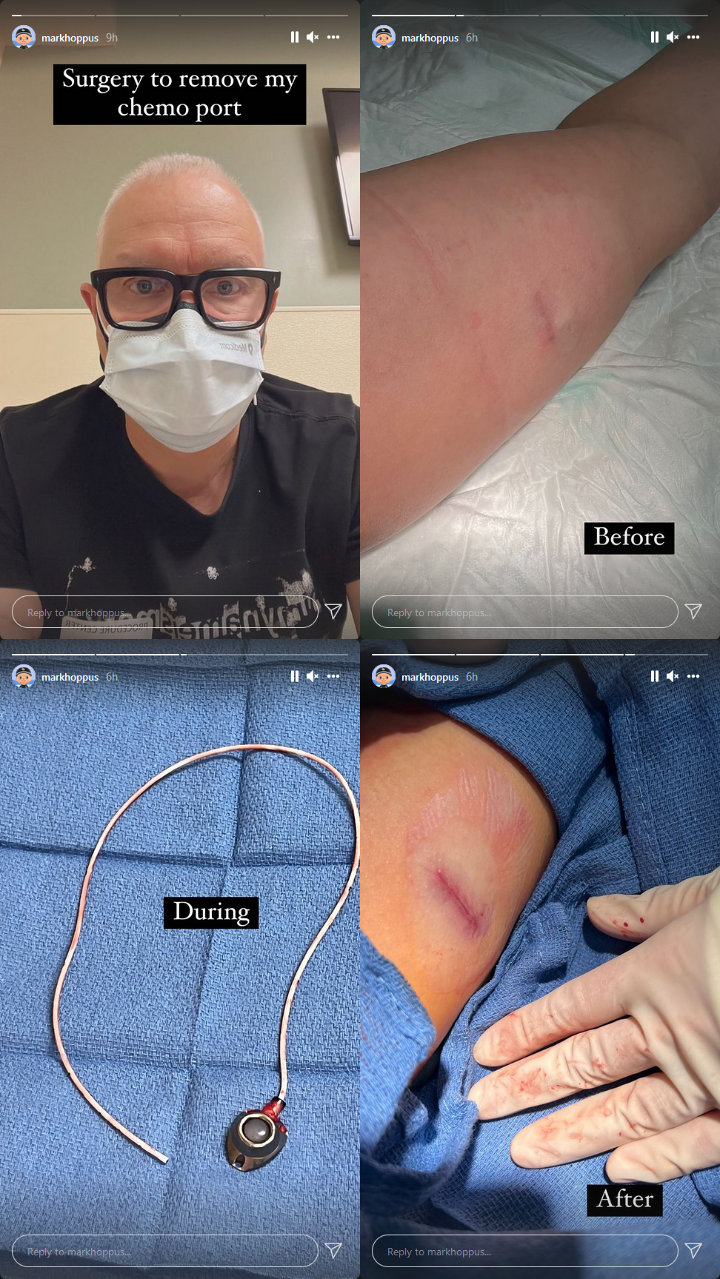 Mark announced that he is cancer-free on September 29. "Just saw my oncologist and I'm cancer free!!" he wrote at the time. Continuing to express his gratitude, he added, "Thank you God and universe and friends and family and everyone who sent support and kindness and love."

Mark shared that he still has to get scanned every six months, but he's feeling grateful to get rid of the disease. He added, "Still have to get scanned every six months and it'll take me until the end of the year to get back to normal but today is an amazing day and I feel so blessed." He concluded his post as saying, "Can I get a W in the chat?"

The relieving news came just two weeks after he shared that he had finished his chemotherapy. "Today I'm grateful to not be going in for chemotherapy. It's been three weeks since my last treatment," he shared on September 15. "Normally I'd be going in today. 'Normally.' Damn. Getting pumped full of poison every three weeks is my normal."

Mark first unveiled his cancer diagnosis in June, noting that he had already undergone three months of chemotherapy. "It sucks and I'm scared and at the same time I'm blessed with incredible doctors and family and friends to get me through this," the musician shared at the time.

In the following month, Mark stressed that the disease was trying to "kill" him. "My cancer's not bone-related, it's blood-related," he further explained his diagnosis. "My classification is diffuse large B-cell lymphoma Stage 4-A, which means, as I understand it, it's entered four different parts of my body."