The former 'Beverly Hills, 90210' star, who is rumored to have split with her actor husband, takes to social media to share a picture of herself in her hospital bed.

AceShowbiz - It might have been a difficult time for Tori Spelling. The former "BH90210" star, who reportedly has marital issues with husband Dean McDermott, revealed that she is currently hospitalized.

On Thursday, July 29, the 48-year-old made use of Instagram Story to put out a picture of herself sitting on her hospital bed while wearing a mask. In the caption, she simply wrote, "Sinus surgery part 2..." 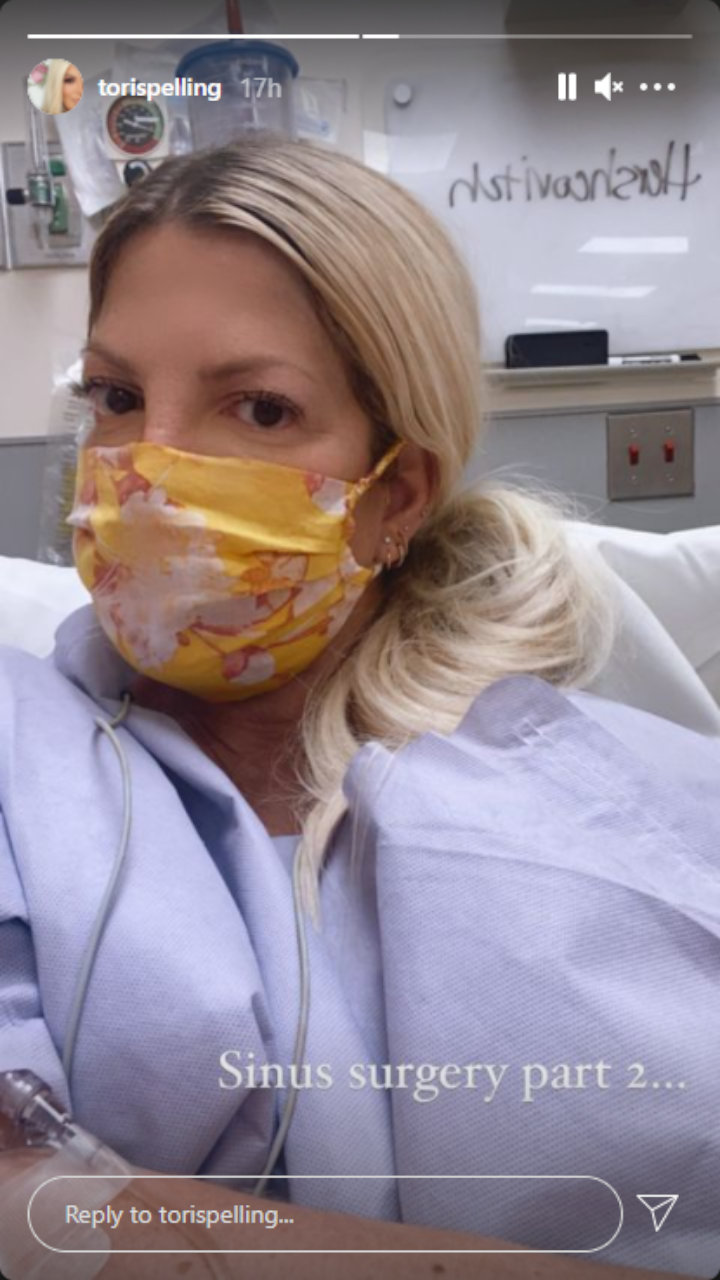 The news arrived just around two months after Tori sparked split rumors with Dean. In early June, she was caught on camera ditching her wedding ring during an outing in Los Angeles. The mother of five, who removed the word "wife" from her Instagram bio, also confirmed that she and her spouse no longer slept in the same bed.

Just days earlier, The Sun reported that Tori's husband is ready to file for divorce from her. However, the "Dead Again in Tombstone" actor has yet to take the move because he "can't afford the expensive split."

"Tori and Dean are totally stuck together right now. Neither of them can afford to go through divorce proceedings," a source told the outlet. "They have five kids and a ton of pets... Their home is always a disaster- it's just a total mess. Right now divorce isn't on the horizon because they can't swing it financially. They are in a living nightmare."

A separate source previously informed the publication, "[He's] happy to be going away [to Canada] and he was ready to be done with his marriage when he returned." However, he was welcomed with "bills that had piled up" upon his arrival to the U.S. The insider then added, "And a lot of those bills are in part because they have so many pets."

"They don't share a bedroom," the insider further claimed. "They are sort of stuck. He financially can't afford to really move out right now."

Tori herself allegedly has more than $6,000 credit card debt. It remains unclear whether she has paid the debt.

Tori Spelling Denies Having Plastic Surgery to Look Like Khloe Kardashian: 'It's All Contouring'