The 'Stranger Things' actress is photographed holding hands with the 19-year-old son of the rock band Bon Jovi frontman, two weeks after he declared themselves as 'bff.'

AceShowbiz - Millie Bobby Brown apparently has no intention to hide her romance with Jake Bongiovi anymore. Months after their dating rumors first hit the web, the new pair have made public their relationship with a little PDA.

The 17-year-old actress and the 19-year-old son of legendary rocker Jon Bon Jovi were photographed holding hands during their date on Thursday, June 17. In pictures obtained by Page Six, they were seen casually strolling the streets around New York.

For the outing, Millie dressed down in a white top and a pink skirt teamed with a pair of blue flat shoes. Her hair was pulled up in a slightly messy do, while she accessorized with a simple necklace and a pair of earrings. She also wore dark shades and a brown face mask, while holding her cell phone in one hand and had a shopping bag on her shoulder.

As for Jake, he opted for a beachy button-up on top of a white shirt with matching tan and blue shorts. He completed his look with a pair of gray sneakers and sunglasses which perched on top of his head, while he wore a pale blue face mask for protection. He also carried a blue tote bag with Millie's dog Winnie inside. 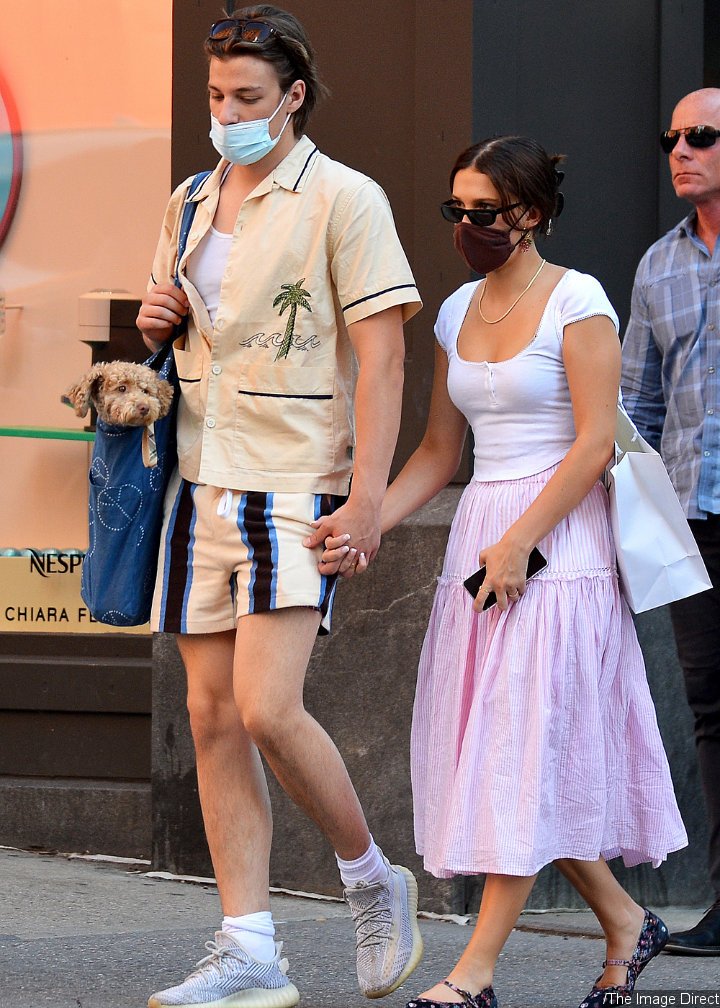 Millie and Jake's dating rumors first sparked in April after popular Instagram account Deux Moi reported they were an item in April. They were reportedly "introduced by a mutual friend."

Earlier this month, Jake fueled the rumors as he posted a picture of him and Millie inside a car together. He playfully pouted his lips while the "IT" star stared into the camera. He, however, dubbed themselves "bff" in the caption.

Millie was previously in a relationship with rugby player Joseph Robinson before calling it quits last year after eight months together. The actress, best known for her role as Eleven on "Stranger Things", has been filming season 4 of the Netflix sci-fi horror drama series.