Molly Elizabeth Lillard, who was a standout University of Michigan volleyball player, was found with gunshot wounds in front of a house in Scottsdale Arizona on Sunday, April 11.

AceShowbiz - NFL legend Al Toon is mourning the death of his daughter, Molly Elizabeth Lillard a.k.a. Molly Toon. The former University of Michigan volleyball player tragically passed away at 28 years old after she was fatally shot by her own husband in apparent murder-suicide on Sunday, April 11 in Scottsdale, Arizona.

According to local news reports, police responded to a shooting in the area of Highland Avenue and 86th Street in east Scottsdale at around 5 P.M. When they arrived, officers found a woman with gunshot wounds in front of the house. The woman, who has been identified as Molly, was taken to to a hospital, where she died from her injuries.

Per police's release, the shooter, who was the victim's husband Royce Dale Lillard III, went back inside the house. "For several hours officers attempted to establish communication with the male with no success," said Scottsdale Police Department officer Kevin Watts.

Hours later, "at approximately 10:45 P.M. SWAT officers were able to make entry into the home where the male suspect was discovered deceased from what is believed to be a self-inflicted gunshot wound," the police official stated.

Police said all signs point to a murder-suicide. It's also reported that the couple's 8-month-old child was present during the shooting, but was uninjured and is currently in the care of family. Molly and Royce married a little over two years ago.

Molly led Middleton High School to two state volleyball tournaments as captain before heading off to Michigan. She led her high school to 60 consecutive conference match victories and recorded 20 digs in a state quarterfinal victory before graduating in 2010.

University of Michigan volleyball team, meanwhile, has posted a tribute to its late former player on Twitter. "We are extremely heartbroken and at a loss for words at this moment," read the statement. The Michigan Volleyball family is sending all of our love to Molly Toon and her family. She was an amazing friend, daughter, teammate and mother. Molly will be greatly missed." 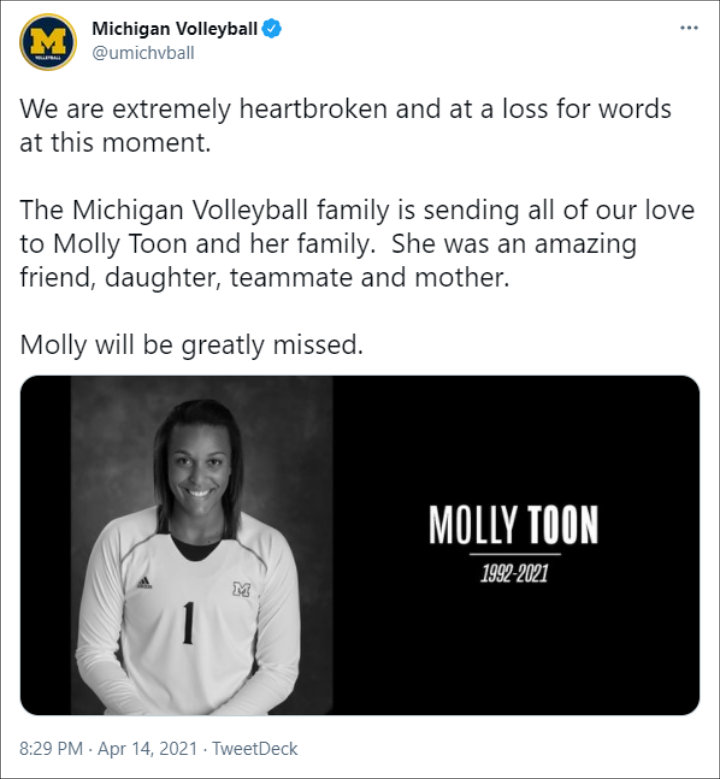 Al Toon has not spoken up on the family tragedy. The former New York Jets wide receiver, who retired in 1992, has four children with his wife Jane. Besides Molly, he is a father to Nick, who was also a former NFL star. His two other daughters, Kirby and Syndey, preferred volleyball like their late sister.