The Instagram personality supports her basketball star lover on his late mother's first death anniversary by giving him a painting portrait of his late mom which was painted by her brother John.

AceShowbiz - Jordyn Woods has given Karl-Anthony Towns a sweet and moving present to commemorate his mother's first death anniversary. On Sunday, April 11, the social media personality was unraveled to have presented her NBA star boyfriend with a hand-painted portrait of his late mother Jacqueline.

Making public the special gift was Karl-Anthony himself. The Minnesota Timberwolves player tweeted two photos of the present. The first one displayed him wearing a DMX-black T-shirt while holding the painting, while the second one offered a look at a touching message hand-written in the back of the painting. "To my king who was raised by a queen! I love you. Jordyn," the note read. 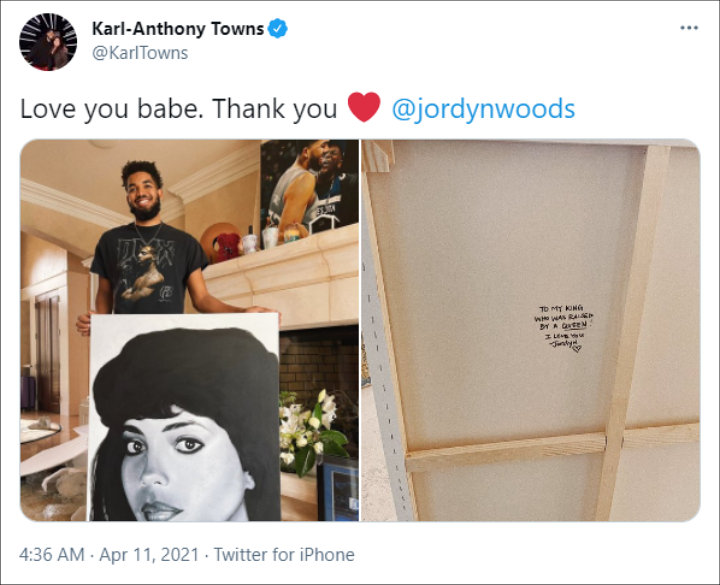 Karl-Anthony Towns shares the moving gift from Jordyn Woods on his Twitter.

The 25-year-old athlete added a simple note to his tweet. "Love you babe. Thank you [red heart emoji] @jordynwoods," he wrote, prompting one of his fans to comment, "What an awesome person Jordyn must be. I'm so happy for you, KAT!" Another one praised, "Man that's beautiful! Incredibly thoughtful! Wishing you both the best!"

Jordyn has also paid tribute to Karl-Anthony's mother on her death anniversary. Along with the same picture her boyfriend tweeted, the "Life of Kylie" alum wrote in her Instagram post, "It's about to be a year since @karltowns lost his queen. We loved this young picture of his mom so much and I wanted to do something to honor her."

Revealing that her brother John was behind the portrait, the 23-year-old continued, "My brother @jwoodzart is one of the most talented people I know and was the only person I trusted to capture her essence."

"This experience never gets easier, you just get stronger," she further added. "Thank you @jwoodzart for being the best brother and artist and thank you @karltowns for always being my rock. Hope you guys are having a blessed weekend!" she added on the same caption. 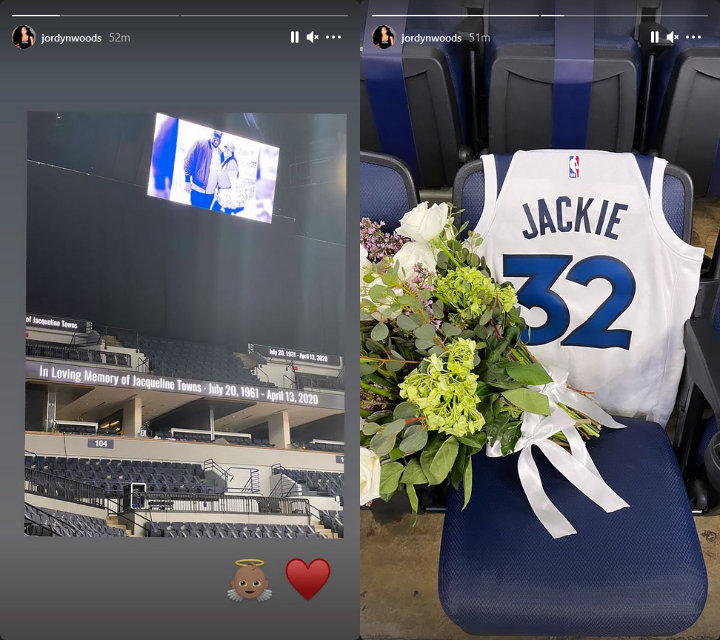 Jordyn additionally showed her support via Instagram Stories. In one story, she shared a picture of what appeared to be a sport stadium with a message display which read, "In Loving Memory of Jacqueline Towns. July 20, 1961 – April 13, 2020." Her second story displayed a white basketball tee with Jacqueline name on it along with a beautiful flower bouquet.

Dwayne Johnson Reacts to Poll Asking Him to Run for President: 'It'd Be My Honor to Serve You'