One day after the British actress was unraveled to have taken over her role, 'The Meg' star turns to social media to make it clear she knew all about the former's casting beforehand.

AceShowbiz - Ruby Rose has given British actress Wallis Day a big thumbs up after she took over the "Batwoman" role of Kate Kane on TV on Sunday night, March 21.

Wallis made her debut as the character on the CW series, which Ruby exited after just one season in 2020, and fans felt sure there was a bat beef between the Australian and the new star after Rose hinted she would be happy to return to the role in a post last week.

"The Meg" star wrote, "I'm obviously moving on to other roles as I think I've done about three films since, but I would totally do it [reprise Kane]... I would absolutely do anything they wanted."

But Rose returned to social media on Monday to make it clear she knew all about Day's casting and was thrilled for the new Batwoman.

"I'm sorry I didn't congratulate @wallisday yesterday," Ruby wrote on Instagram. "I knew about the casting beforehand and didn't know when it aired so i forgot to."

"But I'm stoked for her! I'm seeing all the things I'm tagged in with people sad or wondering how I felt... I feel great I have nothing but good vibes." 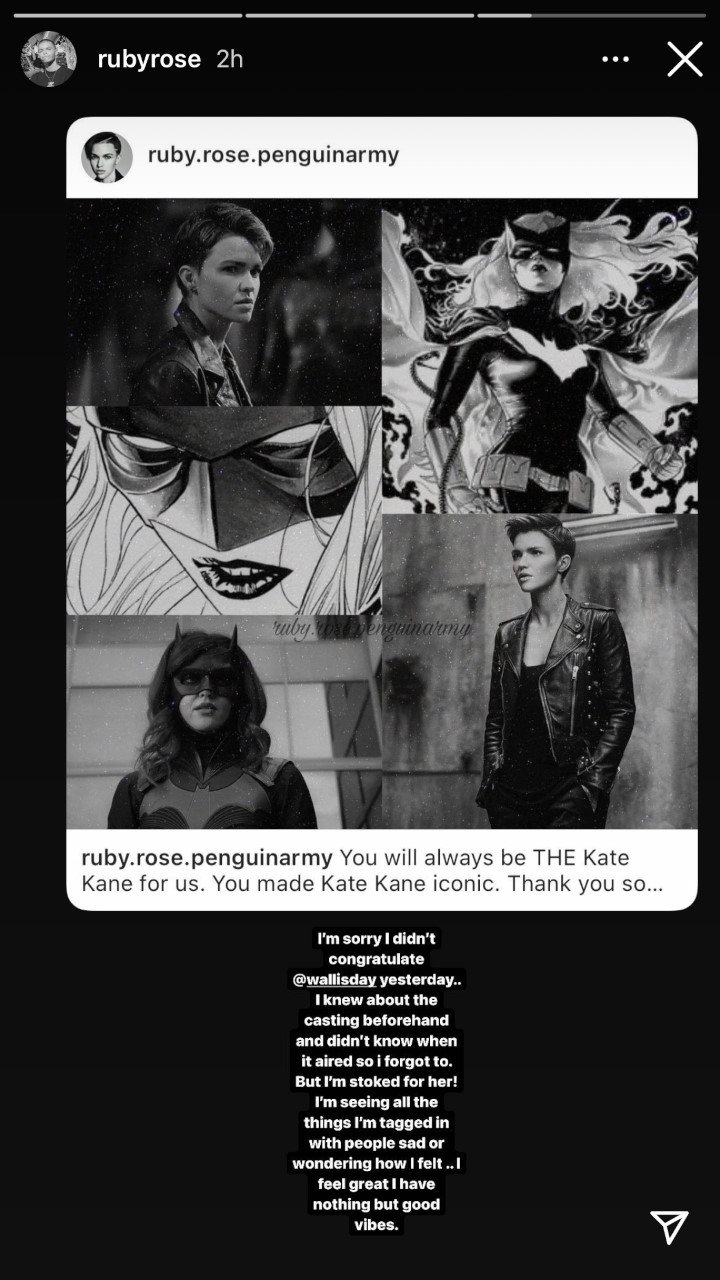 Rose's Kane was seemingly written out of the show following a mysterious plane crash at the beginning of the new season of the show, and Javicia Leslie took over the lead role as new character Ryan Wilder.

Wallis herself has expressed her excitement over her casting on Instagram. "I'm sure you can imagine how much this means to me and how incredible it's been working on the show so far," the 26-year-old declared in the post.

"It's a huge responsibility stepping into the shoes of a character that's already been established and it's a journey I'm looking forward to being a part of and hoping you guys do too," she added. "Everyone's made me feel so welcome and it's amazing being back home with my DC family."