Clearly not happy with one fan's question on Twitter, the Bronx raptress responds fiercely to the troll, writing, 'WE both getting rich with the song till we die...'

AceShowbiz - Cardi B was in celebratory mood after her breakout hit track Bodak Yellow was officially certified diamond on Tuesday, March 9. However, someone appeared to ruin her mood by checking her for allegedly not giving Kodak Black enough credit for the song as he strongly influenced the single's flows and title.

Clearly not happy with the question, the Bronx raptress responded fiercely to the Twitter user, "He got credit on the song." Cardi further explained, "WE both getting rich with the song till we die.. The song is called Bodak Yellow for a reason. You h**s get on this app saying the dumbest s**t."

She also attached a screenshot of a headline fo Kodak praising Cardi. "Kodak Black Says He Wins If Cardi B Wins: 'That's My Twin'," read the headline. 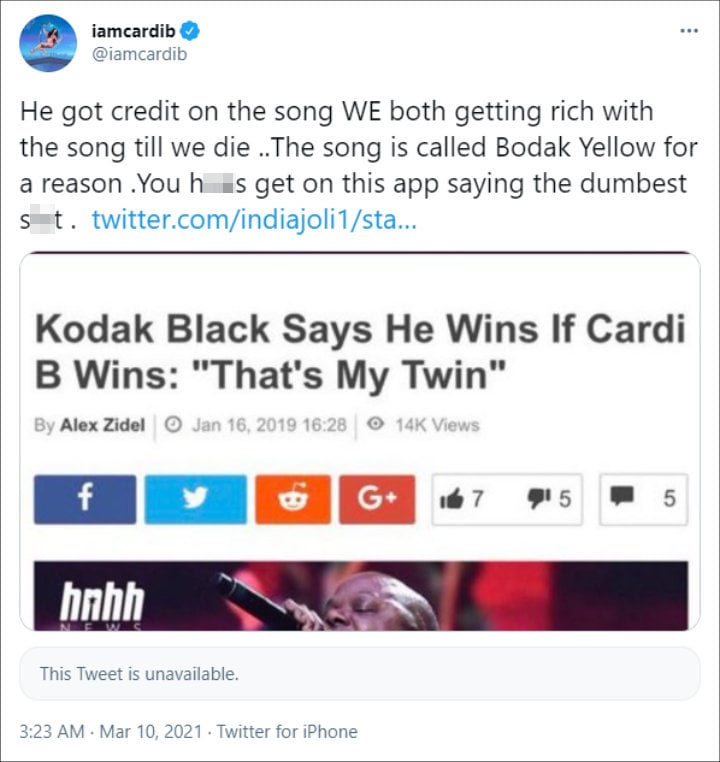 Cardi released "Bodak Yellow" in 2017, prompting fans to accuse her of jacking te rap flow Kodak used on his 2014 track "No Flockin' ". Cardi, however, revealed that she did receive inspiration from the "Wake Up in the Sky" spitter on her hit single.

Cardi herself shared some clips including a video of her cooking up the song. "How's its going .Thank you every1 that send me beautiful congrats on Bodak going Diamond. A couple of years ago I didn't even understand what going diamond means or meant I just wanted to win and break in.This record changed my life.Thank you everyone who showed Bodak so much support and support and buy till THIS DAYY !!" she wrote in the caption.


"That's why it went diamond cause of the support YOU still give. Wap is a spicy one shorty 5X platinum in 7 months makes me really happy cause I put this song out when I was doubting myself then most. With hardly any radio play cause of how nasty it was. but babyeeee it was a shocker !" she went on saying.

Stacey Dash Apologizes for Being 'Angry, Conservative, Black Woman' in the Past