The lead singer of heavy metal band Twisted Sister slams the Rock Hall bosses for 'looking down on metal and other bands that sell millions because we're not their definition of cool.'

The singer and radio personality has taken aim at Rock Hall bosses via Twitter, insisting they ignore what fans want because they don't think their picks for induction are "cool" enough.

"The RnR Hall committee members are arrogant elitist a**holes who look down on metal and other bands that sell millions because we're not their definition of cool," Snider wrote. "The fan vote is their 'throwing a bone' to the peasants. I want to say FU, but I want them to have to deal with us!" 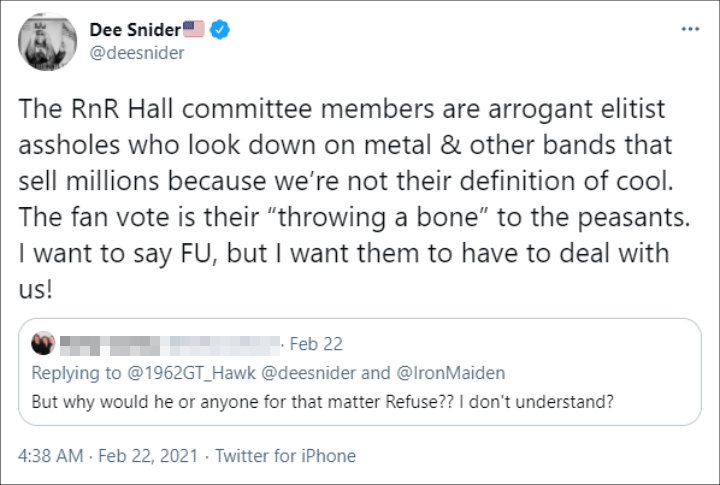 Responding to a fan, who suggested the Hall of Fame "caters to the masses," Dee raged, "If they were catering to the masses, they would have the biggest-selling bands. Corporate rock bands that sell tens of millions are ignored because they aren't 'cool.' " 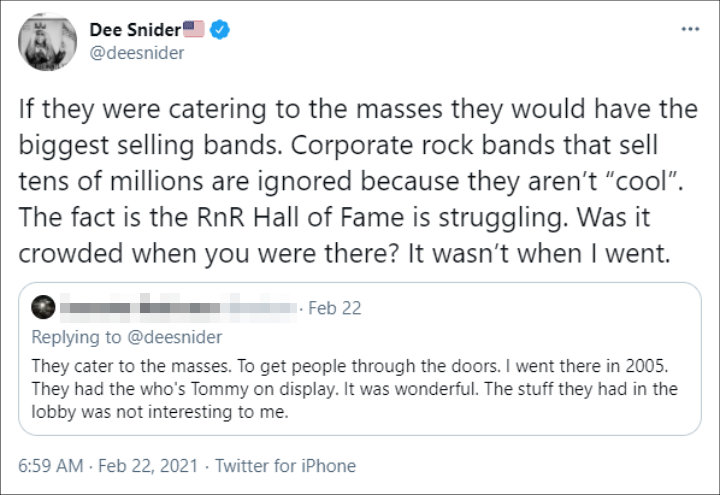 Dee Snider responded to fan suggestion that the Hall of Fame 'caters to the masses.'

Dee went on claiming that the inductees are largely decided by magazine magnate Jann Wenner, who co-founded Rolling Stone. "(Wenner) has been the puppet master since day one," he snarkily remarked. "If it ain't in Rolling Stone it is hard-pressed to get into the Hall of Fame!"

This year's potential inductees include Iron Maiden, whose singer Bruce Dickinson has often hammered the Hall of Fame, calling it a "mausoleum" that is run by "a bunch of sanctimonious bloody Americans who wouldn't know rock 'n' roll if it hit them in the face."

He maintains he'll reject the induction if he is offered it.