The '212' hitmaker calls the British songstress 'corny' for suing her ex-boyfriend of sexual battery, insinuating that the 'Good to Love' singer tries to pocket money from the 'Transformers' star.

AceShowbiz - Azealia Banks has weighed in on FKA twigs' sexual abuse lawsuit against her former boyfriend Shia LaBeouf. After the British songstress filed the lawsuit on Friday, December 11, the American rapper unexpectedly shared her two cents on it.

Taking to her Instagram Stories, Azealia blasted FKA for making the damning allegations against the actor and accused her of trying to pocket some money from the "Transformers" star. She posted a screenshot of an article about the lawsuit and wrote over it, "I'm howling OMG Twigs is reaching for the coin." 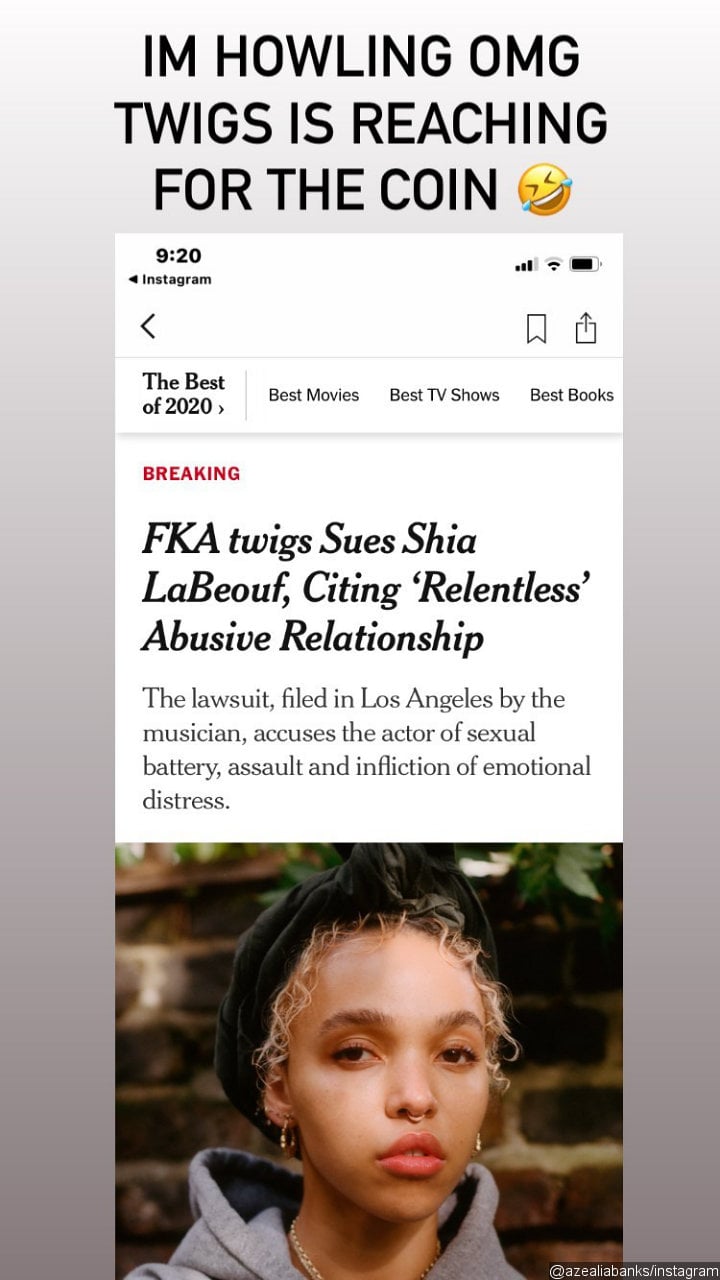 Azealia went on speaking against FKA in audio clips posted on her Stories. "This is so whack and cheesy. That's so corny," she said of the "Water Me" singer's legal move. She took issue with FKA's romantic scenes with underage actor Noah Jupe in "Honey Boy", insinuating that it wasn't appropriate and everybody would flip had the gender been reversed. "I knew you was a corny b***h," she called her out.

It's unknown why Azealia sounds so angry towards FKA, but the former reportedly claimed a few months ago that she had slept with Shia. FKA and Shia, meanwhile, dated from mid-2018 until May 2019, after they met on the set of "Honey Boy".

In the lawsuit, FKA claimed her then-boyfriend physically abused her during their months-long relationship. She detailed an incident which happened on Valentine's Day in 2019, during which he allegedly drove recklessly while pressing her to declare her love for him by threatening to purposefully crash the car. In another occasion, she said that the 34-year-old actor choked her in the middle of night.

But FKA is not the only one that has become Azealia's recent target. The "212" raptress recently ranted against Rihanna and her lingerie brand Savage X Fenty. "I'm sorry. But if you have traded in your dignity to be a savage fenty girl or a fashion nova mascot at any point you are officially an influencer and no longer a special entity," she wrote on her Story post.

"It pains me to watch all you back art girls be such followers and settle to campaign for cheaply constructed sweatshop items when we are truly the ones driving culture and should be first inline for the la perla campaigns," she wrote. "This fast fashion s**t makes all you girls look like cheap spineless chickenheads."

The 29-year-old went on calling Rihanna a "b***h" as she spoke against supporting the business. "Then y'all go spend the money on more one use cheap Chinese hair end it's just like..... China is really economically benefiting entirely too much from black womens beauty," she continued in the lengthy statement. "Plus why the f**k are you promoting clothing for a b***h who would truly never collab with any of you girls or give you a real platform to begin with. Stop letting Rihanna feed off of your energies please. There has to be some secret racist corporate boardroom joke around getting black women to call themselves 'Savages' Please, for the love of god, STOP WITH THIS SAVAGE BULLS**T."

Taking issue with the use of the word "Savage" for the brand, she argued, "JUST CALL IT FENTY OR SOMETHING. THE 'SAVAGE,' TAG IS REALLY DISTURBING AND IT'S GHETTO AS S**T LMAO. TRUST THAT THESE CORPORATIONS HAVE A SCIENCE AND PSYCHOLOGY BEHIND HOW THEY DIVIDE PEOPLE VIA CONSUMERISM. PLEASE STOP WEARING THAT BULLS**T."