The HGTV personality responds to a concerned fan who notices that the straps on Hudson's car seat don't seem to be tightened enough which may put him in danger if there's an accident.

AceShowbiz - Ant Anstead is open to taking advice from worried fans when it comes to his parenting approach. After a "fussy worried" mom fan left a lengthy warning about his son Hudson's car seat, the HGTV personality responded by accepting that it was a "mistake" on his part.

The Instagram photos at issue were initially posted by the estranged husband of Christina Anstead (previously Christina El Moussa) on Saturday, October 17. One picture saw his 13-month-old son sitting down on his car seat, but the straps holding him could be seen hanging loose around the little boy's left arm.

"Hudzo and I set the early alarm clock, went to the workshop, fired up Mustang Sally and cruised like two rockstars to cars n coffee!" the 41-year-old wrote alongside the snaps. "Proper boys morning followed by breakfast and a nap (so the sound of a rumbling V8) perfect!! X."

While many of his followers gushed over the father-and-son duo, one concerned fan noticed the loose straps and voiced a concern over it. "You both look fantastic but please sort his straps out on his car seat," the fan wrote in the comment section.

"I'm not being rude or horrible, I'm just a fussy worried mum, but those straps would never save him in an accident, and he's too precious to be injured xx," the worried mom continued. "You're in a position of a famous dad in the car industry with lots of followers. Please tighten them and show everyone how it's done xx this is sent with care honest xx."

The kind-hearted suggestion has apparently caught Ant's attention, who in return replied, "You are right! Adjusted and sorted! He's way too precious! My mistake x." Appreciating the "Wheeler Dealers" host's response, the woman wrote back, "lots of love to you both xx." 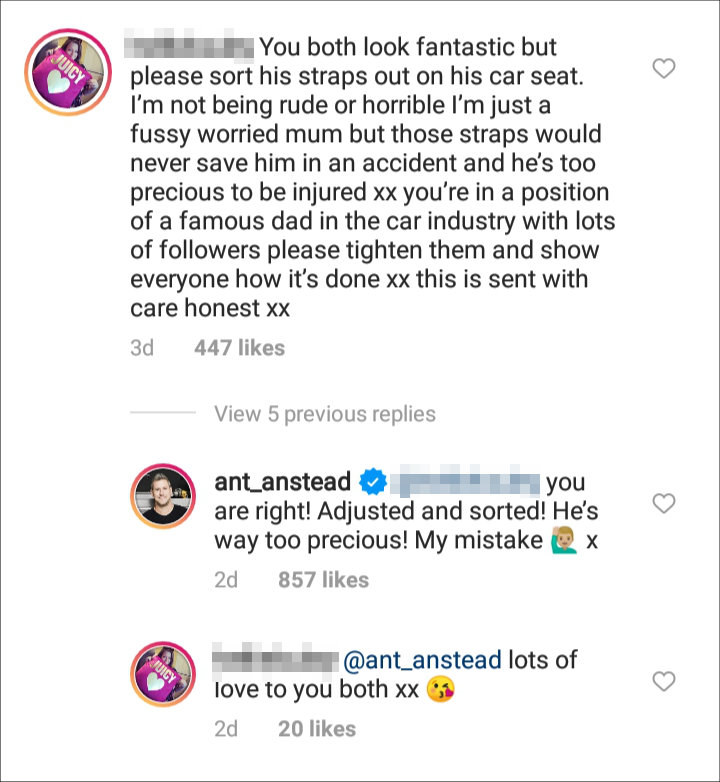 Ant Anstead responded to a fan's comment about his son's car seat.

Ant's post came around a month after he and his wife of less than two years called it quits. Coming forward with the shocking news was his estranged wife who announced on Instagram in mid-September, "Ant and I have made the difficult decision to separate. We are grateful for each other and as always, our children will remain our priority."