Nia Dacosta Explains Why 'Candyman' Release Gets Delayed to 2021

The horror film, which was originally set to hit the theaters on October 16, centers on a struggling artist who begins to lose his sanity after discovering the story of Candyman.

AceShowbiz - Filmmaker Nia DaCosta's forthcoming horror film "Candyman" has been pushed back to 2021.

The movie was set to hit theatres on 16 October, but it is being held back due to the coronavirus pandemic and will now open some time next year, according to Variety.

Directed by Nia DaCosta, it is based on a ghostly legend and centres on a struggling artist, played by Yahya Abdul-Mateen II, who begins to lose his sanity after discovering the story of "Candyman".

As the tale goes, if someone says his name to a mirror five times, "Candyman" will appear and kill whoever summoned him. The much-anticipated film was set to be one of the year's biggest Halloween releases.

The director explained on Twitter the film was pushed because the production team "wanted the horror and humanity of 'CANDYMAN' to be experienced in a collective." 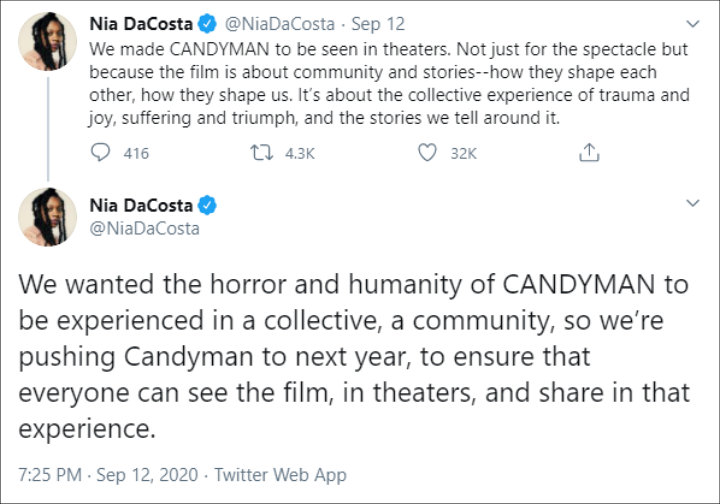 She continued: "We made 'CANDYMAN' to be seen in theaters. Not just for the spectacle but because the film is about community and stories - how they shape each other, how they shape us. It's about the collective experience of trauma and joy, suffering and triumph, and the stories we tell around it."