The 'Good Place' alum rants against the media after reading reports that say she and her partner James Blake have been self-quarantining with the Duke and Duchess of Sussex.

AceShowbiz - Jameela Jamil and Meghan Markle may not be best friends, but they are having the same issue, which is media scrutiny. In a lengthy Instagram post on Thursday, September 3, the British actress claimed she was harassed by press, U.K. tabloids in particular, over her public support for the wife of Prince Harry.

The former star of "The Good Place" aired out her displease with the media after reading reports of her allegedly quarantining with the Duchess of Sussex in the latter's new home. Along with a screenshot of the article, she wrote in the caption, "I've met this woman once ever. Best friends now living together during lockdown?!"

The 34-year-old then fired back at the press as claiming, "Since the first time I spoke out against the UK (mostly tabloid) media over their racist behavior towards her, I've been subjected to press harassment, my family started being harassed and offered money for dirt on me within a week of my first tweet in defense of her. What has followed has been a plethora of lies and rumors about me, set up to discredit me as an individual and convince people I am 'crazy' to devalue my opinion to anyone who may realize I am right."

"Now they are hyperbolizing some relationship they have decided I have with her," she continued, setting things straight about her "friendship" with Meghan, "to make it seem as if i am saying these things out of 'loyalty' rather than because it's right to call out misogyny and racism when you see it because an attack against her, is an attack on all WOC/Black women. She's the symbol of hope and power to be deconstructed before any of us get any delusions of grandeur."

Believing that she and Meghan are constantly targeted by media because of their gender and skin color, Jameela added, "Keep this in mind when you read about her, me or really any woman in media. Especially if she has any colour to her skin." She went on slamming the press, "It's almost as if they don't have something important to talk about... like a pandemic, global economic crisis, climate disaster, political unrest...." 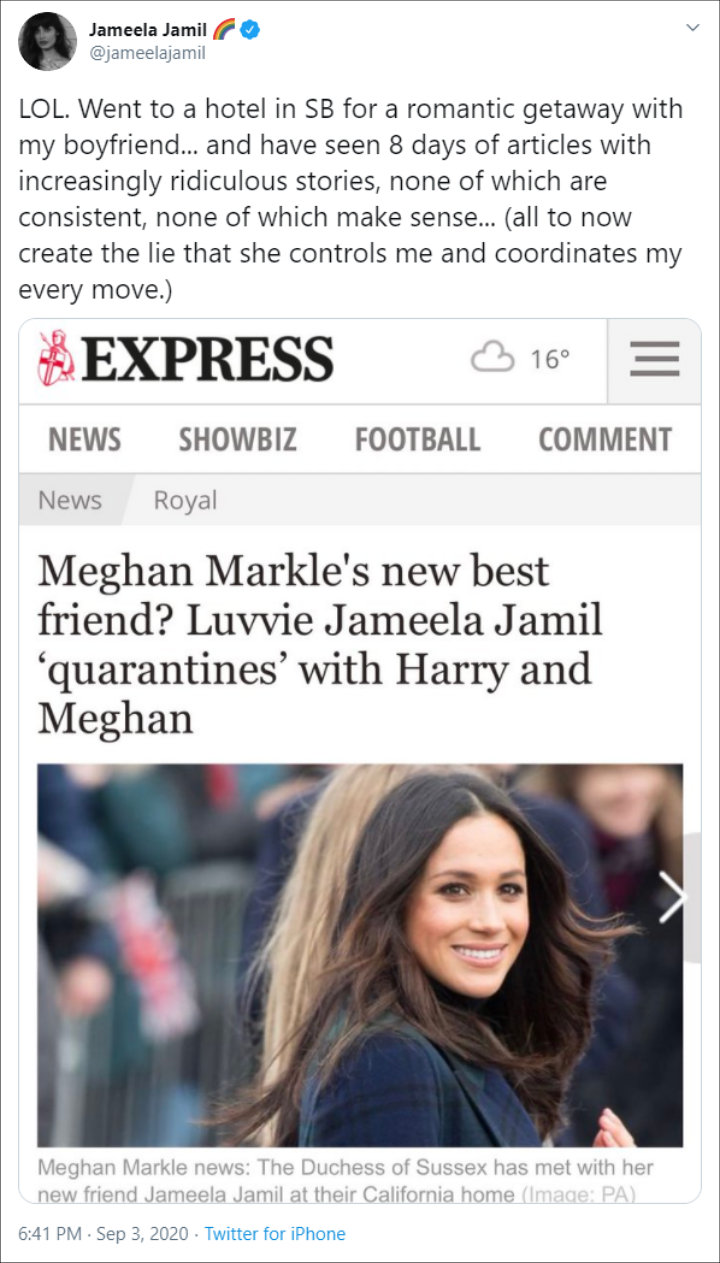 Jameela Jamil debunked reports of her quarantining with Meghan Markle.

Jameela also took to Twitter to laugh off rumors that she and her boyfriend James Blake have been living with Meghan and Harry at their new Santa Barbara home. "LOL. Went to a hotel in SB for a romantic getaway with my boyfriend... and have seen 8 days of articles with increasingly ridiculous stories, none of which are consistent, none of which make sense... ," she posted, accusing the media of creating a narrative "that she controls me and coordinates my every move."

Jameela Jamil: Second Suicide Attempt Made Me Get Rid of My Filter Despite Mixed Reactions Online