Officials from the National Cyber Security Centre claim to have taken down more than 300,000 malicious links to bogus investment opportunities in the past four months alone.

AceShowbiz - Ed Sheeran's name is being used as part of a widespread online scam for supposed get-rich-quick schemes.

Fraudsters are using fake endorsements from celebrities including the "Shape of You" star, as well as business mogul Sir Richard Branson and British TV personality Holly Willoughby to promote the investment scams.

The con artists bombard victims with emails and online advertisements, which include links to what appear to be genuine news articles featuring photographs and made-up testimonials from the rich and famous.

Victims are then encouraged to click another link to invest - at which point their money is sent to cyber criminals related to Bitcoin and other cryptocurrency scams. 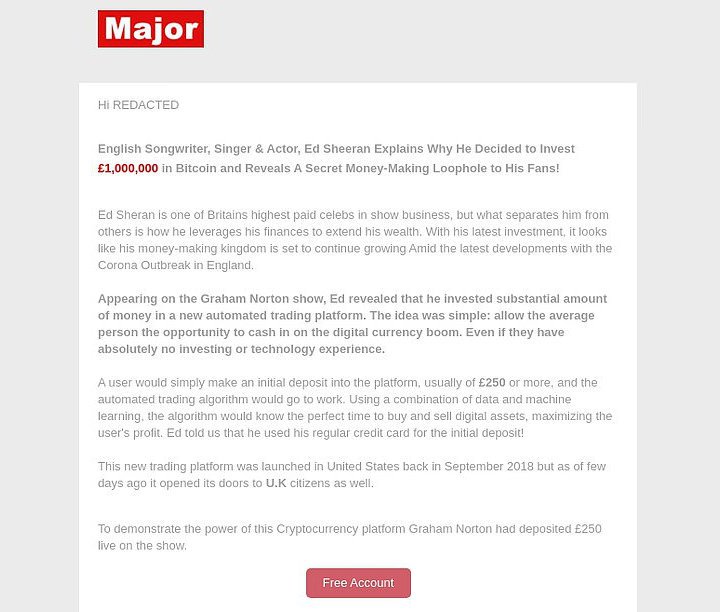 Fraudsters are using fake endorsements from Ed Sheeran among others in investment scams.

Officials from the National Cyber Security Centre (NCSC), part of Government Communications Headquarters, said the organisation has taken down more than 300,000 malicious links to bogus investment opportunities in the past four months alone, according to Mail Online.

It has also received more than 1.8million reports of suspicious emails since launching a new alert system in April – resulting in more than 16,800 links being blocked or removed.

Ciaran Martin, chief executive of the NCSC, said: "These investment scams are a striking example of the kind of methods cyber criminals are now deploying to try to con people.

"We are exposing them today not only to raise public awareness but to show the criminals behind them that we know what they're up to and are taking action to stop it."

Ed Sheeran Admits Wedding Proposal Made Him Feel 'Most Human'