The Kansas City Chiefs tight end calls 'fake news' on reports which accused him of cheating on the fitness influencer, but confirms that they have broken up.

AceShowbiz - Travis Kelce has spoken up, days after rumors emerged that he had broken up with his girlfriend of three years, Kayla Nicole. Speculation arose that the internet celebrity dumped him following his alleged cheating scandal last year.

The NFL star responded to the reports in a now-deleted tweet posted on Tuesday, August 4. While confirming that he and the fitness influencer are no longer an item, he denied that his alleged infidelity caused their split.

"This is fake news... a lie... and not why Kayla and I broke up," he wrote, clapping back at a post which read, "Girlfriend of NFL Player Travis Kelce LEAVES Him After He Got Caught W/ Becky." The athlete went on telling off his hater, "take all your hatred somewhere else please." 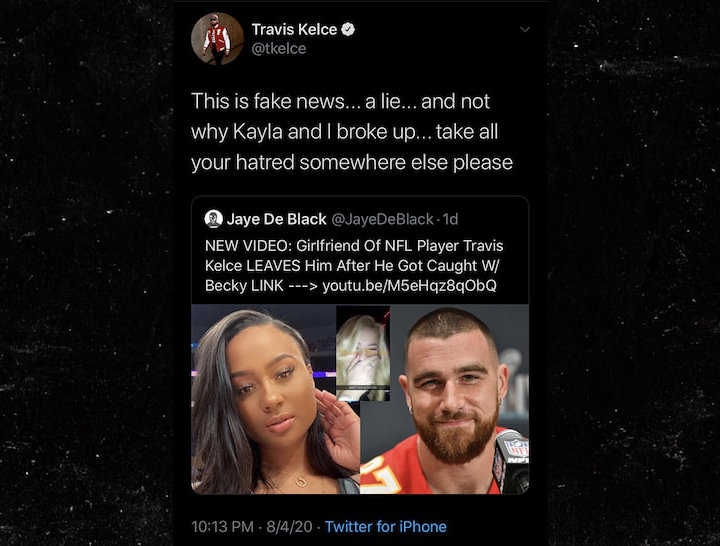 Speculation about the end of Travis and Kayla's romance surfaced after she unfollowed the 30-year-old hunk and removed all images of him from her social media pages. Adding fuel to the split rumors, she additionally posted a cryptic message on Twitter on Thursday, July 29. "when it rains, it pours," so it read.

On Wednesday, Nicole also posted a video of a woman singing "blocking you ... blocking you blesses me. Your opinion doesn't count." She wrote in the caption, "In the name of the Father, Son and Holy Spirit!!!! Y'all need to try Jesus, NOT ME."

According to Dreddsworld, it was the on-camera host who "dumped" the Kansas City Chiefs tight end. While the 27-year-old beauty has called it quits with the Ohio native, he's reportedly not ready to move on and trying to reconcile with his ex-girlfriend.

Travis and Kayla began dating in May 2017. Last year, Travis was accused of cheating on Kayla with another woman after pics surfaced online of him cozying up to a blonde chick. At the time, Kayla came to Travis' defense, saying in a video that she didn't care to view any evidence or hear from any women with direct knowledge of the secret life Travis was alleged to have. "Stop messaging me trash that you read on blog," she told her followers, insisting, "We're good over here."