It all starts after the Paramore singer shares a video urging people not to come to Nashville during the global pandemic, and the political commentator isn't having it.

AceShowbiz - Tomi Lahren is back at it again. The controversial political commentator has gotten a lot of people talking about her after he took to Twitter on Wednesday, August 5 to call out singer Hayley Williams for asking people to be more considerate and think about their actions during this pandemic era.

In a video that has been going around on the Internet, the Paramore singer says that her clip is directed towards those who make a "selfish, quick getaway" to Nashville, Tennessee in the middle of the pandemic. "I'm sure you watch the news, you know that the numbers are sky-rocketing pretty much everywhere. Nashville is no different, people are dying," she said, urging people not to come to the town.

In another video, she doubled down on her comment and slammed the government for doing nothing about it. Instead, according to her, they arrested people who conducted a peaceful protest with masks on and let tourists come to Nashville. "If you really believe in Nashville, don't come here until this s**t is handled," Hayley stressed.

Many people agreed with what Hayley said and praised her for speaking out. However, Tomi was not among them. She retweeted the video and added, "What a pompous & indulgent video this is." The "Fox Nation" host elaborated, "Maybe you have $ to fall back on but many of your fellow musicians (whose music you trashed) are struggling along with bars, businesses & employees who rely on that tourist money for a living while you sit in your ivory tower & spew trash." 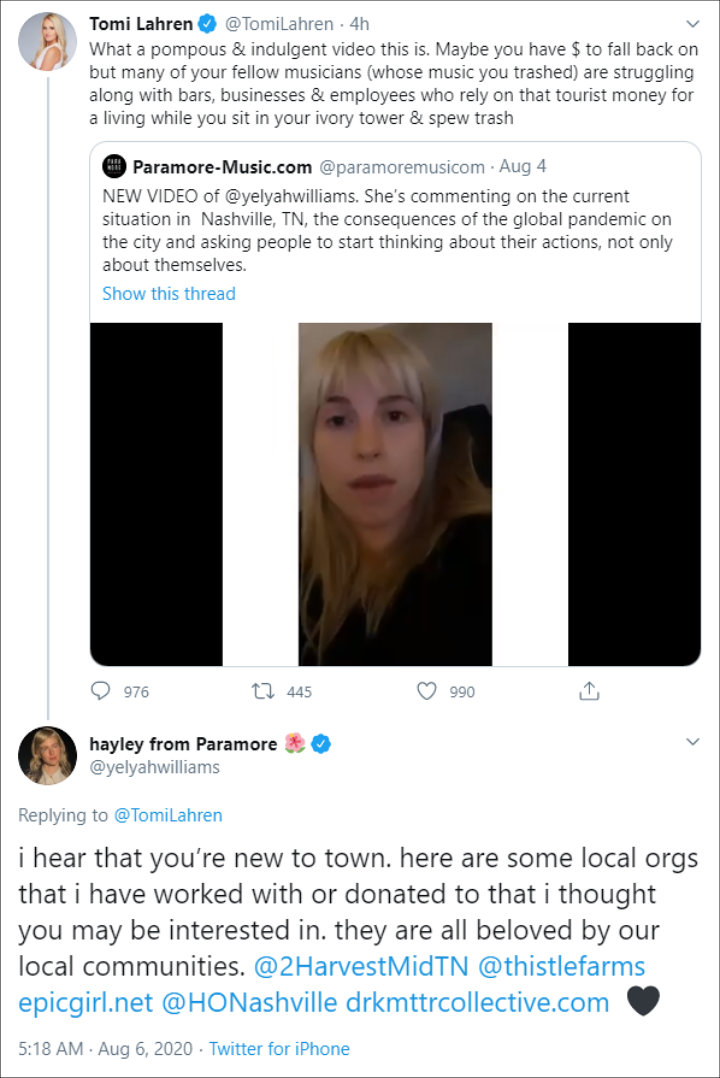 Her comment didn't go unnoticed by Hayley, who decided to give her a classy response rather than lashing out at her. "I hear that you’re new to town," she said. "here are some local orgs that i have worked with or donated to that i thought you may be interested in. they are all beloved by our local communities."