Seeing the 'Ant-Man' star's name among the trending topics on the blue-bird app, social media users instantly fear that the worst might have happened to the actor.

AceShowbiz - Paul Rudd has given his fans a scare for a silly reason. The actor's name became one of the trending topics on Twitter on Tuesday, July 28 and upon seeing it, social media users instantly feared that the worst might have happened to him.

"I saw Paul Rudd trending and got SO f**king scared omfg," one fan shared her reaction upon seeing Rudd becoming a trending topic. Another similarly reacted, "saw paul rudd trending and had to go see if he was ok or not because i got scared."

Despite their initial fear, the "Ant-Man and the Wasp" actor was actually trending on Twitter for another reason and it's actually a good one. It was all due to "One Day at a Time" showrunner Gloria Calderon Kellett's tweet in which she posed a question, "What actor, male, is the perfect level of good looking? Like not too offputtingly handsome. Like the right amount of handsome and also seems fun/funny/goofy?"

People have since replied to the tweet with a shout-out to the "Wet Hot American Summer" star. "Paul Rudd always," one of them wrote. Agreeing, another explained, "He seems just genuinely sweet, normal dude." Someone else mentioned one of the good traits of the 51-year-old actor, "He doesn't age."

After seeing the real reason why Paul became trending on the micro-blogging site, his fans expressed their relief. "oh my god paul rudd is just trending bc hes hot i got so scared," one person tweeted. Another wrote, "So pleased that Paul Rudd is only trending because he is hot and nice like s**t that scared me for a second." 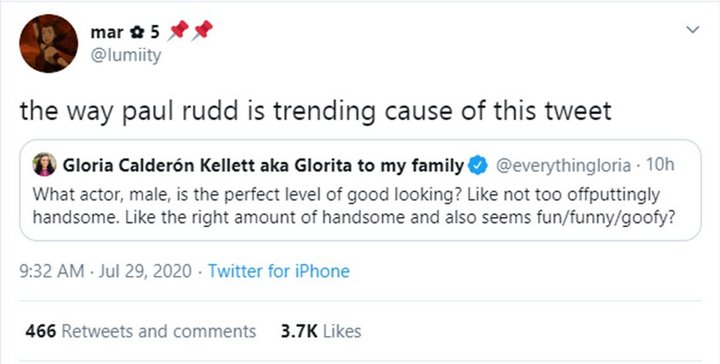 A fan reacted to the real reason why Paul Rudd is trending on Twitter.

Remaining positive, someone else added, "Paul Rudd is trending! Who knows why! Who cares! He's my only light in the darkness!" Another user remarked, "the way paul rudd is trending cause of this tweet."