'Bad Girls Club' Star Demitra 'Mimi' Roche's Friends Shocked by Her Death: It Was Out of the Blue

Music Executive Vince Valholla announces the heartbreaking news on his Twitter account, expressing how heartbroken he is after learning news of the reality TV star's passing.

AceShowbiz - Friends and family of Demitra Roche a.k.a. Mimi are in mourning. Music Executive Vince Valholla announced on social media on Wednesday, July 22 that the "Bad Girls Club" star has passed away. She was 34.

In the post shared on his Twitter account, Valholla expressed how shocked he was after learning of the heartbreaking news. "I'm at a loss for words. Don't know what to say," he said, alongside several photos of Roche. "Mimi was kind to everyone she came across. She was [a] big dreamer & was a part of our Valholla family. I'm heartbroken by the news of her passing. I'm thankful I got to know & work w/ her. My thoughts are with her family & loved ones." 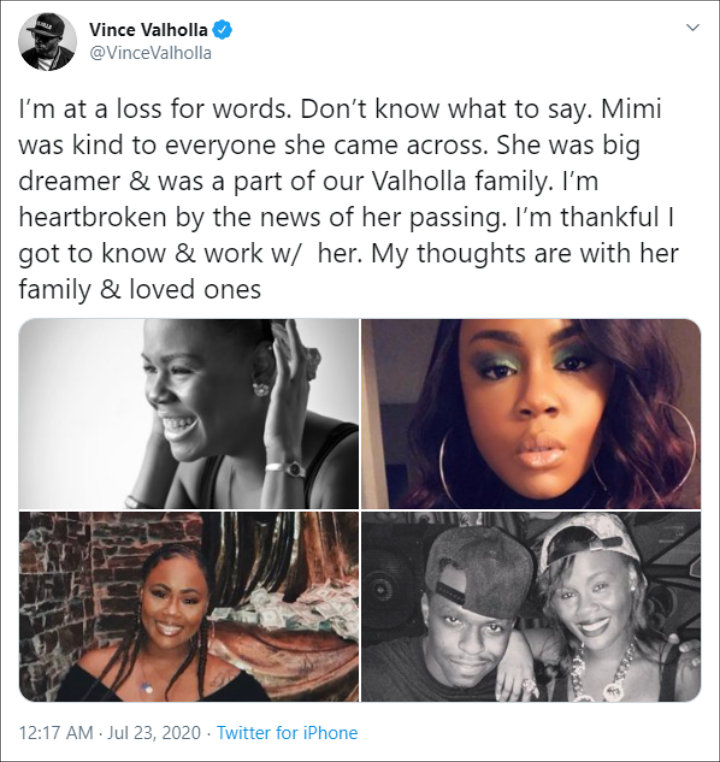 He added in another tweet, "There's probably not one person who would have something negative to say about her. We lost a beautiful soul."

Roche's cause of death is unknown, but according to Valholla, her death "came out of the blue." Meanwhile, a friend of Roche said in her tribute post that Roche recently celebrated her birthday prior to her passing.

"I just wished you a happy birthday then the next day this is what I see. 2020 is def the year of Appreciating your loved ones, hug them tight tell them you love them as life is clearly way to short," so she said. "Some of you may know her from bad girls club but I knew the real her. Such a sweet soul and with radiant  energy so full of life. Gone to soon."

Roche appeared in season eight of "Bad Girls Club", earning herself "The Miami Maverick" nickname during her stint on the show. Besides appearing on the Oxygen reality show, Roche also served as Vice President of A&R at Valholla Entertainment since 2011.