In since-deleted tweets, the Seattle Dragons linebacker expresses how baffled he is to find out that people are sexually attracted to the singer-songwriter.

AceShowbiz - Many people have come to Jill Scott's defense after Kyle Queiro shamed her online. The NFL player took to his account to express how baffled he was after finding out that people are actually attracted to the singer-songwriter.

He said in a now-deleted tweet, "People are attracted to JILL SCOTT!?" He then added, "So it's an energy thing. Got it. & by no means she is ugly. But y'all really sexually aroused by her huh?"

His post soon went viral with a lot of people attacking him. "Kyle Queiro got on Beyonce's internet & questioned how anyone could be attracted to Jill Scott. Like he can't fathom that a plus size woman can be physically attractive and sexy. Fatphobia is real," one said. Another person said she'd "Put his whole a** foot in his mouth. Yes, many people are attracted to Jill Scott. No, it's not just an energy thing. Jilly from Philly is just fine as hell. I'm offended by this level of ignorance. That is all."

Someone stressed that Jill Scott is beautiful and "looks like the sun so I know denying her attractiveness is ridiculous," while an individual wondered, "How did he even fix his hands to tweet something like that about Jill Scott?" One other told him, "Jill Scott slander will never be tolerated. Just say you like white women and go."

Responding to the backlash, Kyle later returned to his account with an apology. He explained that his tweet was poorly worded as saying, "I tried to explain my tweet after realizing how poorly it was worded and conveyed. I didn't grow up on Jill Scott so it was news to me that she was a sex symbol, and I just tweeted. Stupidly. It was best to just delete it & take my L." 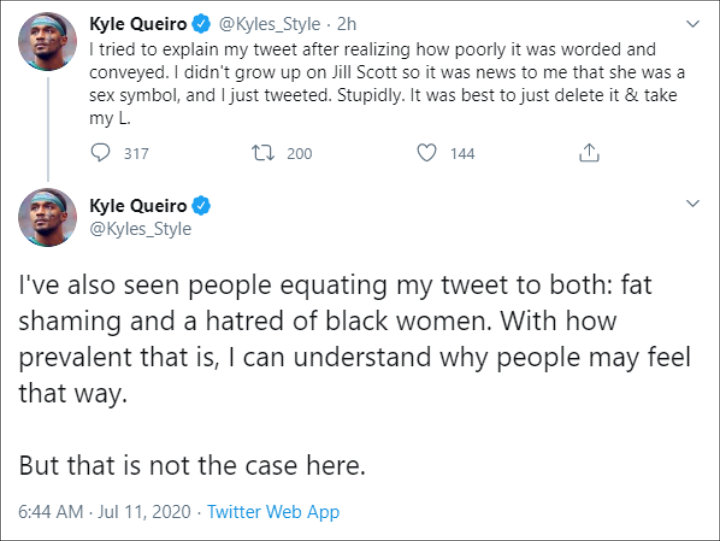 However, he let it be known that he never meant to fat-shame nor throw hate on black women. Kyle said in another tweet, "I've also seen people equating my tweet to both: fat shaming and a hatred of black women. With how prevalent that is, I can understand why people may feel that way. But that is not the case here."