Doubling down on the remarks, the Atlanta Dream co-owner writes in a letter to Commissioner Cathy Engelbert, 'The truth is, we need less -- not more politics in sports.'

AceShowbiz - Georgia Sen. and Atlanta Dream co-owner Kelly Loeffler is recently catching heat over her remarks about Black Lives Matter movement. She sparked controversy after she refused to have "BLM" on jerseys as proposed for the 2020 season.

On Tuesday, July 7, Loeffler wrote on her personal Twitter account, "should stand for and unite around the American Flag — not divisive political movements like BLM that unapologetically seek to defund the police."

Doubling down on the remarks, she wrote in a letter to Commissioner Cathy Engelbert that was obtained by the Atlanta Journal Constitution, "The truth is, we need less -- not more politics in sports. In a time when polarizing politics is as divisive as ever, sports has the power to be a unifying antidote And now more than ever, we should be united in our goal to remove politics from sports." 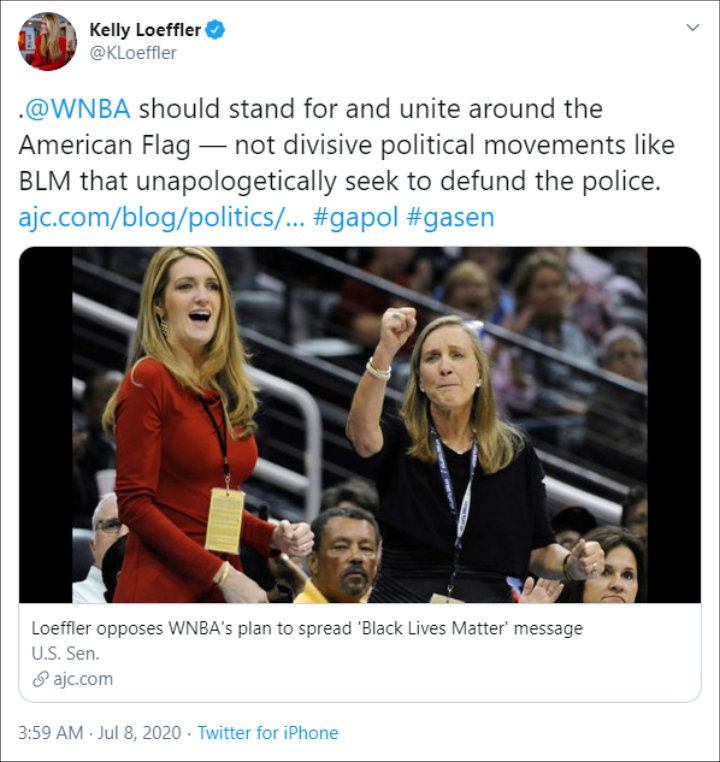 In addition to going against having "Black Lives Matter" on warmup jerseys, Loeffler wanted "Say Her Name" on WNBA apparel to be scrapped.

In response to the letter, Engelbert distanced Atlanta Dream with Loeffler, saying, "The WNBA is based on the principle of equal and fair treatment of all people and we, along with the teams and players, will continue to use our platforms to vigorously advocate for social justice. Sen. Kelly Loeffler has not served as a Governor of the Atlanta Dream since October 2019 and is no longer involved in the day-to-day business of the team."

Dream guard Renee Montgomery also weighed in on the matter. "I'm pretty sad to see that my team ownership is not supportive of the movement and all that it stands for," she tweeted on Tuesday. "I was already sitting out this season and this is an example of why. I would love to have a conversation with you about the matter if you're down?" 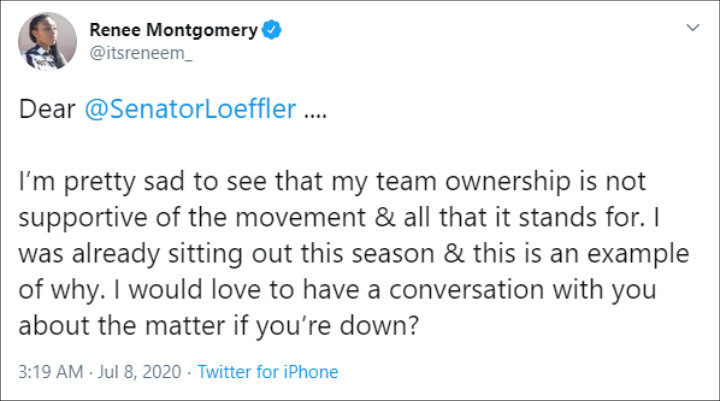 WNBA's Players Association appeared to call for her exit.

Back on July 6, WNBA announced that "2020 season is dedicated to social justice with games honoring the Black Lives Matter movement and the #SAYHERNAME campaign." It added, "The Women's National Basketball Association and the Women's National Basketball Players Association (WNBPA) today announced the launch of a new platform, The Justice Movement, and the creation of the WNBA/WNBPA Social Justice Council."