The 'Harry Potter' actress joins co-star Daniel Radcliffe and fellow actor Eddie Redmayne in speaking out against the author over her online comments that have been deemed transphobic.

AceShowbiz - Emma Watson is standing up for the transgender community. Shortly after J.K. Rowlings attempted to defend her controversial tweets that were deemed transphobic by many, the actress portraying Hermione Granger in all eight of the "Harry Potter" movies added her voice to the criticism against the famous author.

While she did not directly name the 54-year-old writer in her public statements, the 30-year-old actress expressed her solidarity with the trans people in a series of Twitter posts. On Wednesday, June 10, she began by tweeting, "Trans people are who they say they are and deserve to live their lives without being constantly questioned or told they aren’t who they say they are."

"I want my trans followers to know that I and so many other people around the world see you, respect you and love you for who you are," the "Little Women" star continued in a separate tweet. She additionally encouraged fans to follow in her lead by donating to Mermaids and Mama Cash, two charity organizations that support transgender rights. 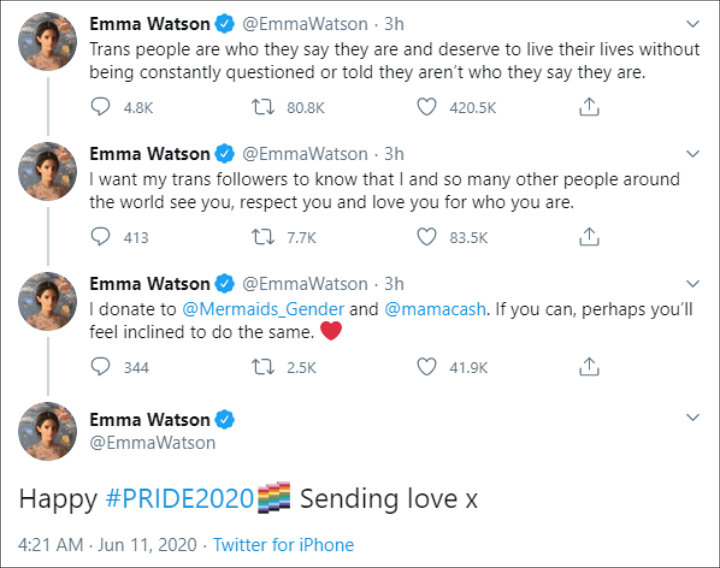 Rowlings first sparked controversy on Saturday, June 6.. "If sex isn't real, there's no same-sex attraction. If sex isn't real, the lived reality of women globally is erased," part of her tweets at issue read. "I know and love trans people, but erasing the concept of sex removes the ability of many to meaningfully discuss their lives. It isn't hate to speak the truth."

The posts were quickly met with heavy criticism from queer activists and many stars from Rowlings' film franchises. Watson's co-star Daniel Radcliffe was among the firsts to speak out against the author. In a statement on the Trevor Project web site, the leading man of the "Harry Potter" movies stressed, "Transgender women are women."

"Fantastic Beasts" star Eddie Redmayne later chimed in with a statement of his own. "Respect for transgender people remains a cultural imperative, and over the years I have been trying to constantly educate myself," he shared his thought with the press. "As someone who has worked with both J.K. Rowling and members of the trans community, I wanted to make it absolutely clear where I stand. I disagree with Jo's comments."

On Wednesday, Rowlings tried to clarify her controversial statement through a lengthy essay she published on her website. Claiming to be a survivor of domestic abuse and sexual assault, she elaborated, "I'm mentioning these things now not in an attempt to garner sympathy, but out of solidarity with the huge numbers of women who have histories like mine, who've been slurred as bigots for having concerns around single-sex spaces."

Emma Watson on Being Mistaken for Emma Roberts in 'Harry Potter' Special: It's Too Cute

Emma Watson Feels Empowered 'Getting Behind the Camera'