The 'Please Me' rapper has been notified by a Twitter follower about a KTLA report that edited her Instagram Live video to make it seem like she encouraged violence during George Floyd protests.

AceShowbiz - Cardi B has gotten herself a public apology. Shortly after expressing her outrage over a news report suggesting that she promoted violence in the midst of nationwide protests over the death of George Floyd, the "Bodak Yellow" hitmaker saw the anchor expressing his remorse for taking "her words out of context."

On Tuesday, June 2, Doug Kolk tweeted, "I apologize to @iamcardib if I took her words out of context." The anchor at Los Angeles' CW-affiliate, KTLA continued, "I respect her for using her platform to connect with people during these difficult times and it was wrong of me to not let her full voice be heard. I will make sure that is corrected during my next segment."

Doug Kolk apologized to Cardi B for taking her words out of context.

Doug's apologetic statement came hours after Cardi was informed by one of her Twitter follower that her Instagram Live video encouraging fans to vote has been edited to make it seem like she tried to incite violence. In response, the 27-year-old rapper asked the fan to share the report, "You lying!!! Where so I can read they motherf**kin a**."

Cardi B reacted to report of her promoting violence.

It was not long for Cardi to get her hand on the clip of the segment in which Doug could be heard narrating, "This is rapper Cardi B used her massive platform to promote the violence." Attaching the video in her follow up tweet, she blasted the news outlet for the report, "KTLA SUCK MY D**K .Im not promoting violence in promoting the PROTEST ."

Cardi B blasted KTLA for suggesting that she was trying to incite violence.

Not stopping there, the wife of Offset also took aim at Doug in a separate tweet. "@DougKolk why your no lip square head having a** ain't put the part were I said to vote ? You cottage cheese breath having b***h," she fumed. "Why don't you post how a conservative Christian trump supporter post my [address] and encourage people to loot my home(which by the way he [going] to jail )" 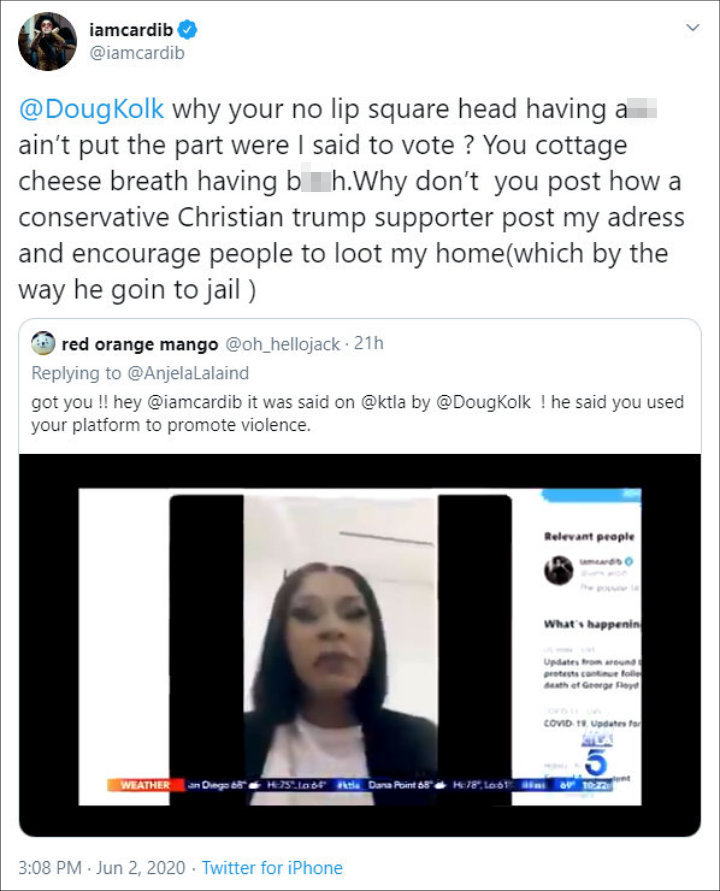 Cardi B slammed Doug Kolk for editing out her call to vote.

The video Doug used in his segment came from one of Cardi's videos in which she highlighted police brutality to call for fans' participation in local and national elections. "Seeing people looting and going extremely outraged, it makes me feel like 'Yes! Finally! Finally, mothaf**kers is gonna hear us now. Yeah! And as much as people is so against it, at this point, I feel like I'm not against it even though it do scare me and I don't want anybody to get hurt," she opened the video.

"It's really frustrating," she went on to share. "I feel I've been doing police brutality videos ever since my teeth been f***ed up. And the only s**t that changed has been my f***ing teeth." She added, "People are tired. They're tired of showing that it's like, 'Oh, motherf**ker are educated, motherf**ker could take the grown and adult way and act peaceful.' People are tired of that. So now this is what people have to resort to."

Cardi continued to remind followers that they have power to push for a change by voting. "And when I say voting I'm not only talking about the president. We could vote for mayors, we could vote for judges, and we could also vote for D.A.'s," she noted before pointing out that those people "have the power to prosecute these cops when they do f***ed s**t like this."