The Grammy-winning raptress publicly declares on Twitter that she supports the actions following the death of George Floyd at the hand of four police officers.

AceShowbiz - Cardi B engaged in a heated argument on Twitter after she took to her account to share footage of a looted Target in Minneapolis during the riot. The Grammy-winning raptress publicly declared that she supported the actions following the death of George Floyd at the hand of four police officers.

"They looting in Minnesota and as much as I don'’t like this type of violence it is what it is," so she captioned her video on Thursday, May 28. "Too much peaceful marches,too much trending hashtags and NO SOLUTIONS! The people are left with NO CHOICE." 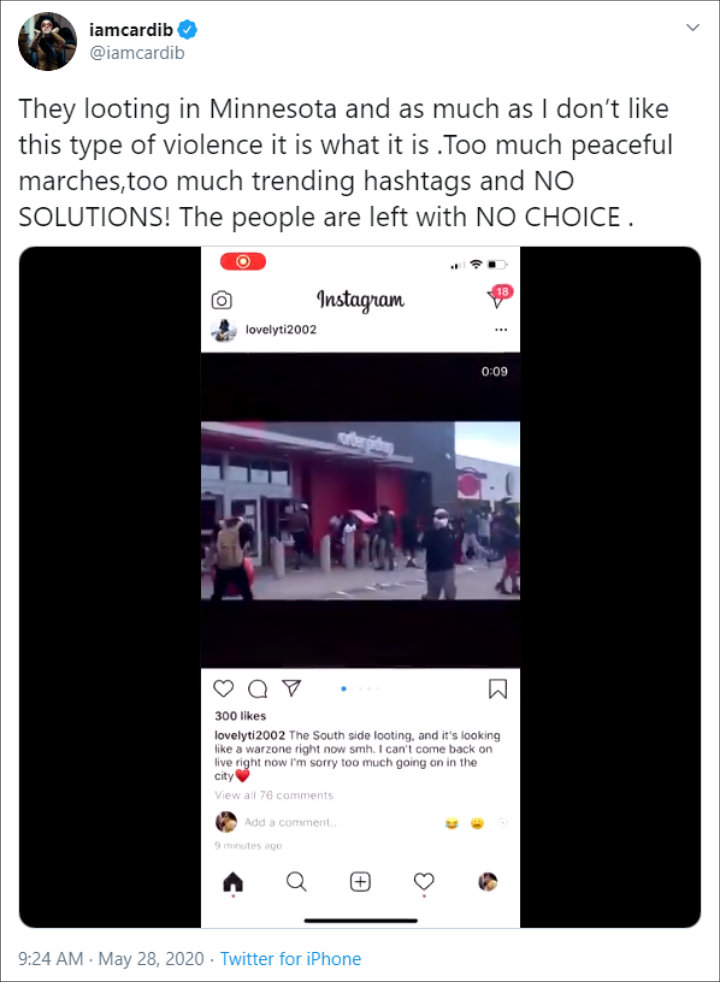 Some of her followers, however, didn't agree with her political views. "How does looting, rioting and destroying your OWN community bring justice for anyone?" the fan wrote to the "Bodak Yellow" hitmaker, who later responded, "How does targeting, profilin,beating and murdering black men with no consequence equal serving and protecting? Who's giving them justice and trust on cops ? Mind your business and eat your salad !" 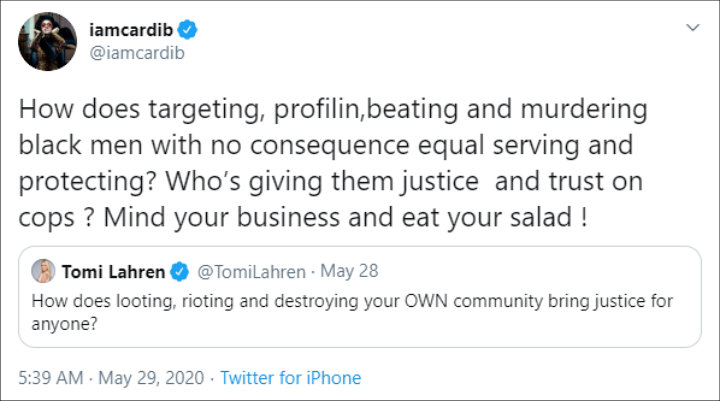 She clapped back at the naysayer.

Some others echoed Cardi's sentiment as one shared a GIF of Martin Luther King Jr. saying, "A riot is the language of the unheard." Meanwhile, another fan commented, "The people are fed up certainly the peaceful protest isn't doing anything at all."

"you're right this isn't just about George Floyd; it's about him and ALL THE OTHER BLACK LIVES LOST! what's not clicking? literally black people are getting killed left and right and peaceful protests aren't doing JACK S**T BC THEY ARENT LISTENING," one supporter added.

Regarding to George's death, four cops involved in the arrest of George were terminated from the Minneapolis Police department. However, charges have not been pressed. On May 27, President Donald Trump announced that the FBI and Justice Department are in the middle of investigating George's death.