Paying tribute to his late father who passed away at the age of 92, the 'Night at the Museum' star remembers him as 'the most dedicated husband to Anne for about 62 years.'

AceShowbiz - Ben Stiller has lost an important member of his family. In the early hours of Monday morning, May 11, the actor playing Lawrence "Larry" Daley in "Night at the Museum" and its sequels shared with the world the sad news that his father, veteran comedian Jerry Stiller, has passed away at the age of 92.

Making the announcement amid the coronavirus pandemic, the 54-year-old actor made it clear his father's passing has nothing to do with the novel virus. "I'm sad to say that my father, Jerry Stiller, passed away from natural causes," he announced in a Twitter post.

In his tribute, the "Zoolander" star went on to remember the late comedian as "a great dad and grandfather, and the most dedicated husband to Anne for about 62 years." He concluded his post by stating, "He will be greatly missed. Love you Dad." 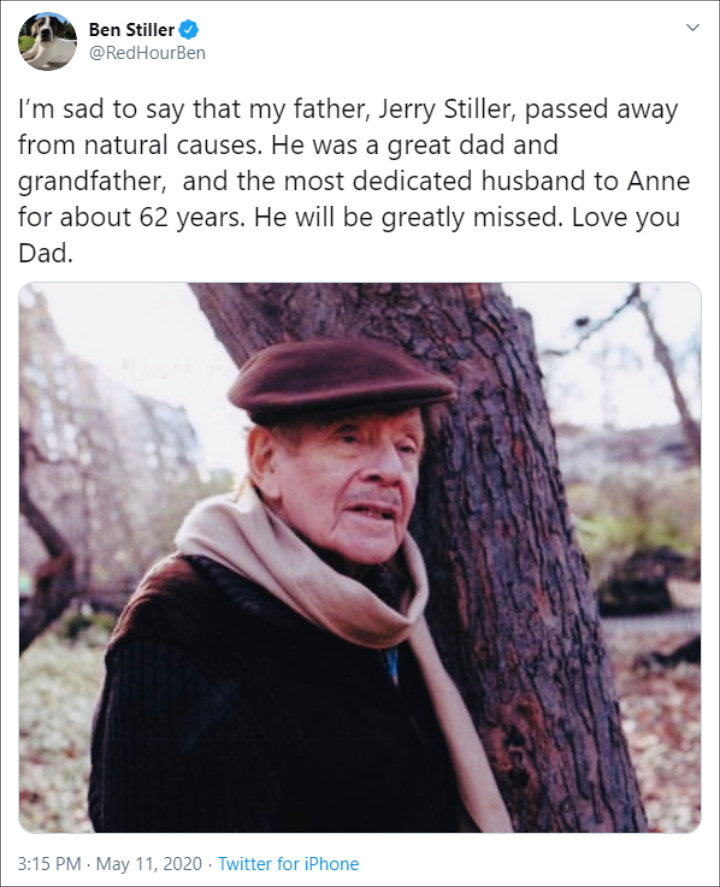 Jerry's death came five years after his wife, Anne Meara, died at the age of 85 in May 2015 following multiple strokes.

Jerry, who made his Broadway debut in 1954, was best known for his role as Frank Constanza on "Seinfeld" as well as Leah Remini's father, Arthur Spooner, on "The King of Queens". He has starred opposite his actor son Ben in a number of film, including "Zoolander" and its sequel, "Heavyweights", "Hot Pursuit" and "The Heartbreak Kid".

After news of Jerry's death broke out, comedian Christopher Titus took to Twitter to express his heartbreak. "I'm in tears," he wrote. "So sorry, and thank you for the joy and the laughter Jerry Stiller, you were, and will always be, comedy gold. RIP." 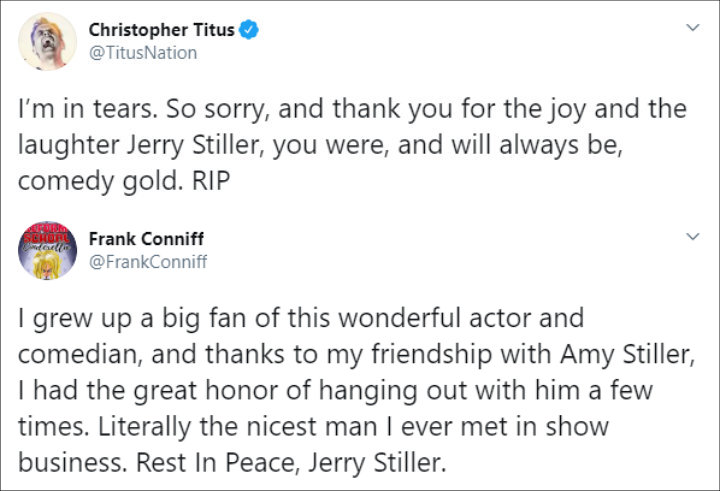 Fellow comedian/writer Frank Conniff has also paid tribute to Jerry via Twitter. "I grew up a big fan of this wonderful actor and comedian, and thanks to my friendship with Amy Stiller, I had the great honor of hanging out with him a few times," he remembered. "Literally the nicest man I ever met in show business. Rest In Peace, Jerry Stiller."