Nearly two decades after they finalized their divorce, the famous exes show their united front as they quarantine together with their adult children amid the coronavirus pandemic.

AceShowbiz - Demi Moore and her ex-husband Bruce Willis have once again proved that divorced couple could maintain a good relationship with each other. Twenty years after they finalized their divorce, the "Ghost" actress and the "Die Hard" actor showed the world that they were having fun quarantining together in the midst of the coronavirus lockdown.

Showing off the exes' togetherness was their youngest child, Tallulah Belle Willis. The 26-year-old actress shared with her devotees a photo of her parents donning matching white-and-green striped pajamas as they posed with their hands wrapped around each other. Demi covered her face with a pair of dark glasses and gave a thumbs up to the camera, while Bruce mimicked a fist pump gesture.

The Instagram snap has also captured Tallulah's older sister, Scout Willis, in the background. Standing right behind her parents, the 28-year-old beauty threw her right leg into the air. Also making it into the frame was Tallulah's boyfriend, Dillon Buss, who posed close to Scout while holding their pet dog in one hand. The two also rocked similar pajamas for the photo session.

"chaotic neutral," Tallulah wrote in an accompanying caption of the post. She also let out another photo on her Instagram Story handle. This time, they were joined by several others who also donned matching pajamas as they were crowding a sofa. Bruce and Dillon, in the meantime, could be seen holding a giant spoon and fork respectively. 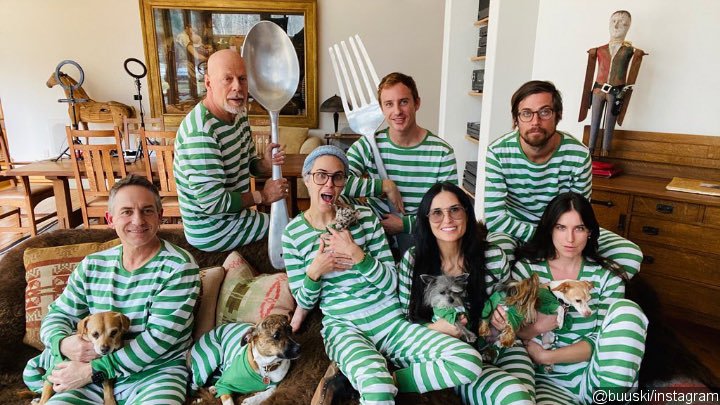 Tallulah Willis shared the togetherness of her parents.

Tallulah's April 6 post has excited many. One said, "Dam imagine having the hero dad and the mom who played on charlie's angels. Lucky." A second one commented, "Aw this makes me so happy to see. Blessings." Another, in the meantime, pointed out at a dog who was captured lying on a couch wearing a matching outfit, "The dog: 'This s**t again.' "

Demi and Bruce tied the knot in 1987 before splitting for good in 2000. In addition to Tallulah and Scout, they also share 31-year-old Rumer Willis who recently made an appearance in 2019's film "Once Upon a Time in Hollywood". After their divorce, Demi married Ashton Kutcher from 2005 to 2013. Meanwhile, Bruce exchanged wedding vows with Emma Heming Willis in 2009.

Demi Moore on Surprise Runway Debut at Fendi Show: I Literally Felt Like a Little Kid