AceShowbiz - The surviving members of Rush are leading tributes to their iconic drummer and "soul brother" Neil Peart following his death at the age of 67.

The legendary percussionist and lyricist passed away on Tuesday, January 7 after a secret battle with brain cancer, and now singer Geddy Lee and guitarist Alex Lifeson have shared their heartache at the loss of their old pal.

"It is with broken hearts and the deepest sadness that we must share the terrible news that on Tuesday our friend, soul brother and band mate of over 45 years, Neil, has lost his incredibly brave three and a half year battle with brain cancer (Glioblastoma)," they write online.

"We ask that friends, fans, and media alike understandably respect the family's need for privacy and peace at this extremely painful and difficult time."

The Rush stars add, "Those wishing to express their condolences can choose a cancer research group or charity of their choice and make a donation in Neil's name."

A host of friends, fans, and peers have also honoured Peart on social media.

Black Sabbath's Geezer Butler tweets, "Sad to hear of Neil Peart passing. RIP," while the Beach Boys' Brian Wilson posts, "I just heard about Neil Peart passing. I feel real bad about this - he was way too young. Neil was one of the great drummers and he'll be missed. Love & mercy to Neil's family."

Weezer's Patrick Wilson shares, "Oh man... Neil Peart. Every drummer just ran to their kit to bust out (Rush hit) Tom Sawyer. His dedication and RE-dedication to his craft is a lesson in always improving. Never be complacent. You can ALWAYS be better. R.I.P." 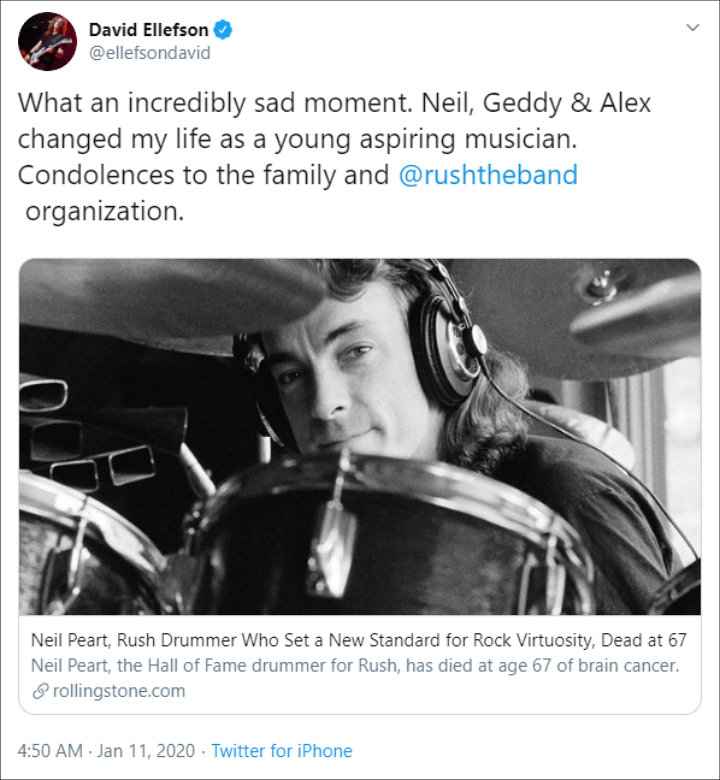 "What an incredibly sad moment. Neil, Geddy & Alex changed my life as a young aspiring musician. Condolences to the family and @rushtheband organization," tweets Megadeth's David Ellefson, and John Mellencamp's former longtime drummer, Kenny Aronoff, adds, "Sadly Neil Peart passed away earlier this week. One the greatest drummers of all time. One of the founding members of one of the greatest Rock n Roll bands of all time. Rush".